This military TV-3C/U tube tester has a May 1954 date stamped on the power transformer and was manufactured for the Navy by Jetronic Industries. It's a Hickok design and I've read online that the Hickok 547 and 548 test sets are more or less civilian versions of the TV-3. The TV-3 conveniently reads micromhos directly on the meter scales unlike the popular TV-7, and was superseded by the TV-10 in the early '60s. The TV-10 and TV-3 are similar but the TV-10 doesn't have the VOM functions, although it was updated with more tube sockets.
The lid won't close completely down over the front panel because it hits the front panel handles. And only a couple of front panel mounting screws can be matched up to threaded holes in the cabinet. This case is actually made for either an "A" or "B" model.

The front panel of the earlier variants must be ever so slightly larger than the "C" because there's just no way to get all the screw holes in the "C" front panel to line up to the case holes. Plus there's an additional annoyance with the power transformer bumping up against an internal rib on the left inside of the case which doesn't allow the front panel to center up perfectly in the cabinet.
There are two fuses holders on the front panel of the TV-3C. One is for the Line and the other is for the Bias supply. Fuses are added to equipment to protect it, a fact that seems to be lost on some people. The AC line fuse in this tester is supposed to be 1.5A but someone installed a 5A fuse, over 3X too high. Likewise, the Bias fuse is supposed to be 125ma but there was a 2A fuse installed. That's 16X too high - the transformer winding would probably open before blowing a 2A fuse, which kinda defeats the whole purpose of having a fuse. 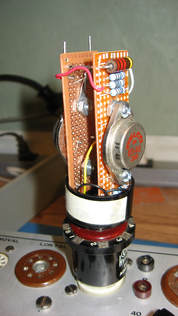 The ACS is detailed on the Alternating Current Sink page.
Last update 10/18/2017
Powered by