I've been working from makeshift workbenches ever since our move a couple of years ago. Basically they're just folding tables set against a wall with wall-mounted shelves for test equipment to set on. They're too low and too narrow so I've decided it's time for a real radio workbench.
Since the bench will be too large to go through a doorway, it is completely assembled using screws so the shelves and legs can be removed should it ever need to be moved.

Because of the height of the bench and shelves, it's too tall for my current workspace's sloped ceiling up in the garage loft, so I created a new lab downstairs, in the area where the observatory computers were originally going before I decided to build a seperate observatory building.
Cutting and assembling the bench has taken the better part of three days. I don't think I'll have time to build the cabinets right now, so I will concentrate on stainiing the bench and then completing all the wiring. Then I can start using it while working on the cabinets.

The workbench chair was originally in my old Exploradome observatory, but now it's found a new home.
When I built the shelves I used the dimensions in the plans, which left a height of 6-inches from tabletop to the bottom of the first shelf. Of course this turned out to be about 1/2-inch too low for some of the things I wanted to put under there. There's always something that doesn't want to fit. So to fix the problem I added 1-inch thick oak extensions to the bottom of the shelf supports and the column. Now all the small equipment slides right under the shelf like originally planned. 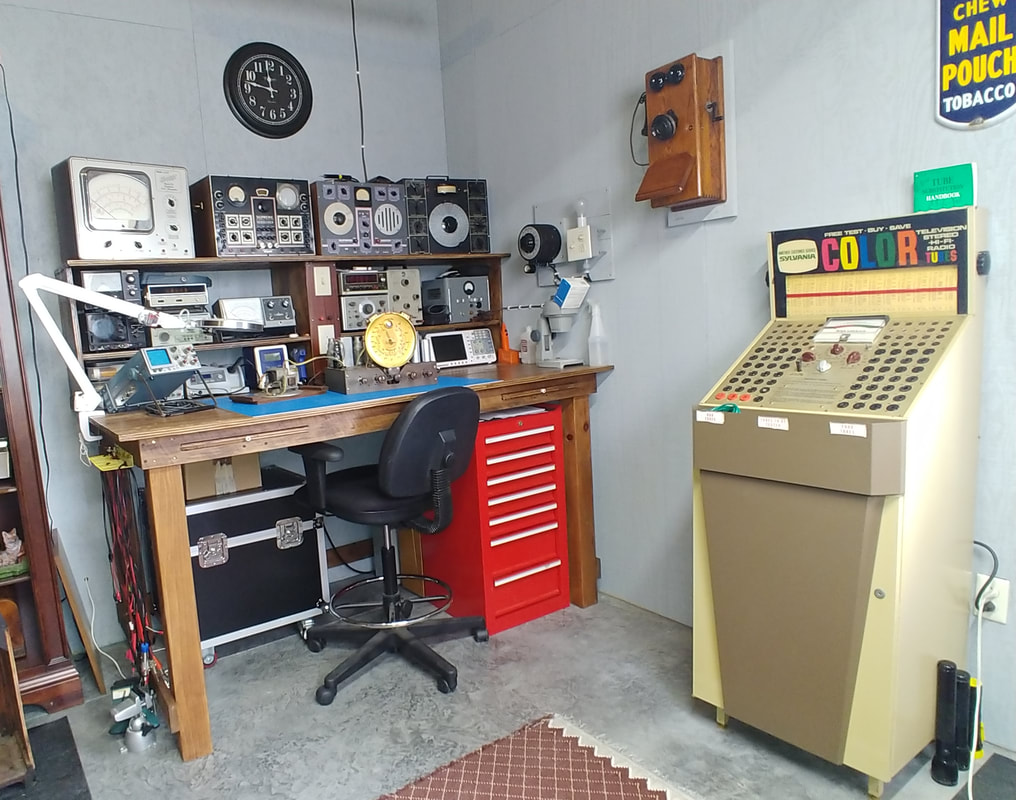 The new workspace is starting to come together. I've populated the bench with most of the equipment from the old workbenches, which I'll adjust over time as I decide what pieces are most useful. I brought my drug store tube tester down from upstairs and my TV-3 and Precision tube testers are sitting under the bench (along with my EQ-8 mount). I also purchased a 24x36-inch cutting mat to protect the bench top.

I just finished remounting the variac and dim bulb tester on the wall to the right. And the isolation transformer is on the far right of the middle shelf. I usually keep all three hooked in series: from the isolation transformer to the variac and then through the dim bulb tester. There's an outlet on it for the device under test (DUT) and it also has a bypass switch to remove the bulb from the circuit.

I placed my small Harbor Freight tool cabinet under the right side of the bench. It's a perfect fit and gives me seven drawers for tools. It worked out so well I don't think I will bother building the cabinets from the plans, even though I've already precut some of the pieces. I think I will also leave the left side open under the bench for more leg room.
Page created 8/1/2020
Last edited 8/30/2020
Powered by