This Audolyzer has a black front panel and is S/N 619, making it several years older than my gray model with S/N 2443 from circa 1946. The power transformer is stamped with what I think is a three number date code of June 1940, so my best guess at a date for this one is around 1941.

I hadn't planned to buy another Audolyzer but the price was right and it is the perfect match to both my 560-A Vedolyzer and my model 561 Combination AF and RF Metered Generator. I can use them together as a "dynamic analysis system" just as in Supreme's 1941 advertisement.
​The power transformer high voltage winding is shown as 600Ω, but is reading 530Ω, and there is 14Ω difference in readings between the center tap and the two ends of the coil. This doesn't necessarily mean the transformer is bad, but it doesn't prove it's good either. So I temporarily powered it up on my variac (with no tubes installed in the Audolyzer) and checked the AC voltage readings. They look good, within a volt from the winding center tap to both sides, and the filament voltages look good, too. So I hope this means it's OK. I also recently purchased an original Audolyzer transformer online and its ohms reading are very close to the readings on this transformer. 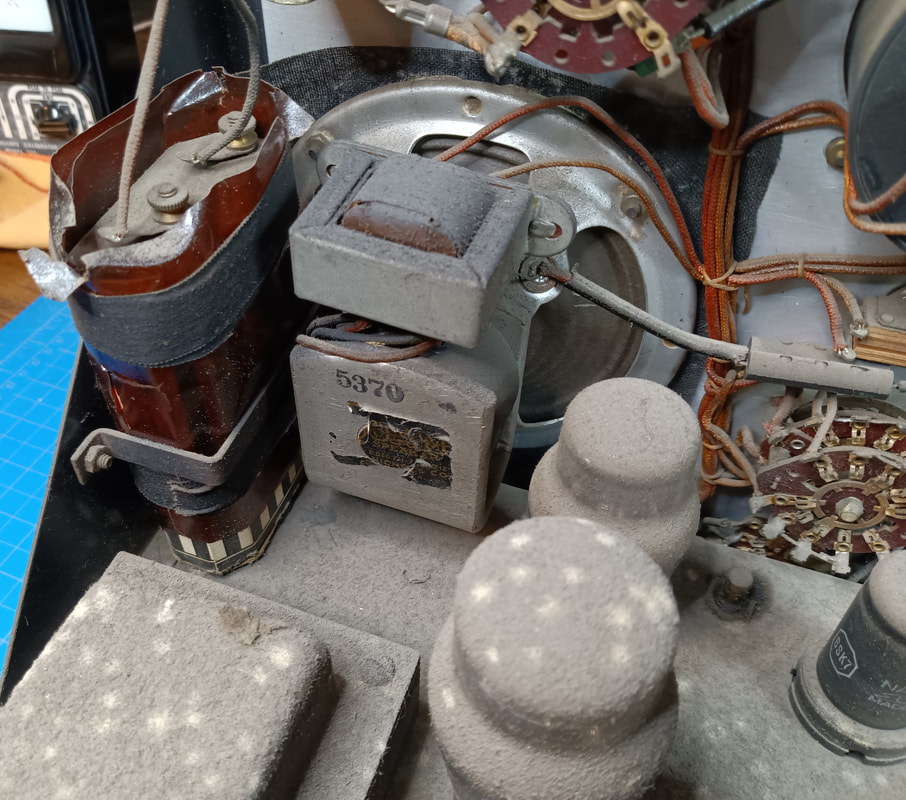 Someone in the past actually wrapped the batteries, which helped prevent them from rusting the chassis. That was thoughtful.

​Hmmm, I wonder what all the white spots are in the dust? Probably not something I'd want to breathe in.
​The old 1.25-volt button bias battery has been replaced with a modern 1.5-volt button cell for testing. I pressed small indentations in both sides of the battery so it would stay clipped in the holder. If it doesn't work then the audio circuit will be modified to match the later Audolyzer schematic that provides self-bias.
The audio out of the first AF amp (in the 6SQ7) looks clean and undistorted on a scope, so the 1.5-volt bias cell seems to work just fine.
​
​Removing the bottom cover plate to get at the trimmers, plus bringing a hand or tool anywhere near the coils, affects the tuning, so I made a brass plate with holes to access the alignment screws, and substituted it for the cover plate during the alignment.
​On the switch end of the cable, where the coax shield was soldered to the switch frame, the center conductor insulation was melted, allowing the braid and center conductor to intermittently touch. Trimming the cable would have made it too short so it was replaced. The effect of the center conductor shorting out was the same as switching the RF Multiplier to 1000.

​The center conductor of this old coax is really odd. It's a fine, springy steel wire and reminds me of nichrome, and like nichrome wire you can't really solder to it. The wire was just "embedded" in the solder. I replaced it with a piece of the original antenna input cable that was previously removed and which matches the cable used for this same connection in the gray 562.
​My AC line voltage runs high, usually around 123VAC, 5.5-volts higher than the specified 117.5VAC. Also, the power usage is stated as 50 watts max. However, even at 117-volts the power consumption is high at about 56 watts. For comparison the gray Audolyzer is also a bit high at about 52 watts. I then checked the transformer's temperature and at two hours it was over 120°F and still had not stabilized. ​​I also checked the transformer temperature of the gray Audolyzer and it stabilized around 120°F.

The B+ is stated as 250 volts on the later schematic, but 270 volts on the early schematic. Both my early and later Audolyzers use the same power transformer and rectifier, and at 117VAC both give 270 volts B+. Also, the instrument's 6.3VAC filament voltage runs a little bit high at 6.6VAC.
For the next test the AC input was lowered until the B+ was at 250VDC, which put the AC input at 110 volts. This also put the 6.3V filament voltage at 6.1VAC, and the 5V filament at 4.9VAC. And the power consumption dropped to 51 watts. Lowering the B+ made no discernable difference in the Audolyzer's performance and the power transformer temperature stabilized at about 114°F.

To lower the high line voltage permanently I added a 20Ω 20-watt resistor in series with the transformer's primary to keep the AC to it at around 110 volts. The total power dissipation of the 562 at 117VAC is still 56 watts, but now 5 watts of it is dissipated in the power resistor and not the transformer.

​Since both transformers behave similarly, I think the only issues are they are nearly 80 years old and being stressed by high AC input voltages, but just in case I actually found an original Audolyzer transformer online for a replacement if needed.
This just about wraps up work on this Audolyzer. It's back in its cabinet and will replace the gray Audolyzer on the workbench because it matches the black Vedolyzer and black 561 Metered Combination AF/RF Generator.
Page created 10/8/2021
Last edited 8/21/2022
Powered by