The manual says that the TS-323/UR Frequency Meter and Crystal Calibrator provides a simple, accurate and reliable means of adjusting transmitters and receivers to any desired frequency in the range of 20 MHz to 450 MHz, as well as measuring frequencies of external signals. This frequency meter is basically a VHF version of the BC-221 and just like the BC-221 it uses a matching calibration book for setting frequencies. The manual also ​states that under fixed bench operating conditions the heterodyne oscillator in the TS-323 is accurate to within .005% of the indicated frequency, and under service conditions it is better than .01%. The 1000 KC crystal oscillator is accurate to within .001% or 10 Hz of the specified frequency. The manual also says the TS-323 was used by the Army Air Force, the Navy, and by the British military.
I bought this TS-323/UR frequency meter to use with a couple of my boat anchors and ordered it from a military surplus dealer that I've dealt with since the 1970's, but they mistakenly sent me a meter that had been hacked up by someone. They replaced it with new parts after I contacted them, but it's been kind of a comedy of errors.

In the first meter someone removed the corrector knob, cut off the corrector capacitor's shaft behind the front panel, and mounted a vernier control by drilling two new holes in the faceplate. And the name plate on the cabinet was missing and J105 had been removed so the power cord from a homebrew internal power supply could be brought out. Not exactly an original meter.

Restoring the Hacked Up Meter

The case had been repainted dark gray, but it's really scratched up now, so I'm sanding it a bit to remove as many of the scratches as I can before giving it a new paint job in the original light gray color.

I've been using Rustoleum Professional Gloss Light Machine Gray as it's the closest color match that I've found in an off-the-shelf spray paint. It might not be exact but it's close enough. And since this old military equipment is dirty and been exposed to the elements over the years, it's probably not exactly the same color it started out as anyway.

Refinishing the cabinet is done for the good meter and all that's left to do is finish altering the wiring in the battery compartment for the new power supply I'm building for it. 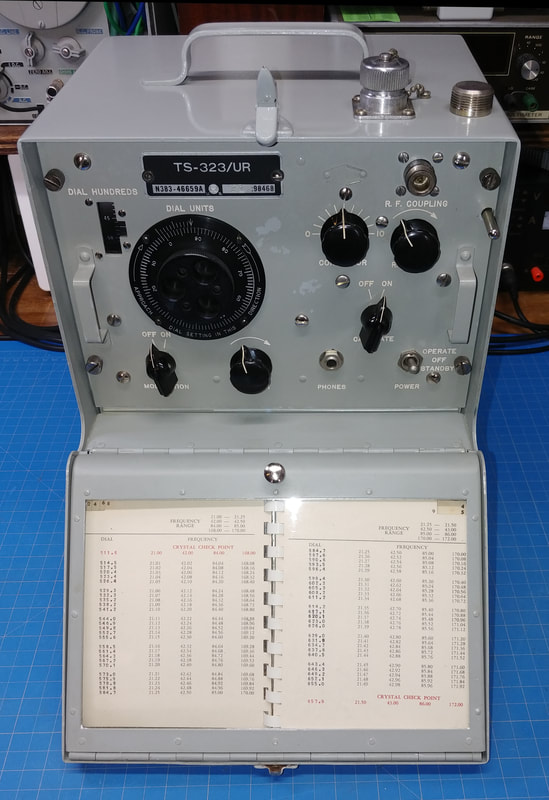 The paint on this meter is a different shade of gray from the previous military sets I refinished. I went ahead and touched up the missing paint but it's not a great match. This meter's paint has a brownish tint so I need to see what I can find at the paint store.

The first unit came with a homemade power supply to replace the batteries, but it needs rebuilt too. I wanted to reuse this power supply in the good meter, but oddly it won't fit in the cabinet, because there is a bakelite panel riveted in the bottom that raises the supply just high enough that its chassis hits some rivet heads on the back wall of the compartment, and that keeps it from going in far enough to shut the rear door. The bakelite panel has been removed from the other meter's cabinet which is why it fits in it. I don't want to remove the bakelite panel from the new cabinet so it looks like I'll need to build a new supply.
The bottom of the filter can is bulging and has leaked electrolyte, and there was a low ohm short to ground at the wiring to the choke terminals, but after removing the choke and capacitor it disappeared. Neither component checks as shorted so now I'm not sure where the short was. The rectifier diodes still check good, but are so old I can't find a data sheet. There's two diodes on each stack and together the two stacks form a full-wave rectifier. There was also a voltage regulator tube that's missing, but whoever built this didn't add the series current limiting resistor for the tube, so it had to be working overtime. I think I'm just going to strip the whole thing and start over.
I replaced all the solid wiring with stranded teflon except on the 6.3VAC filament lines, added a fuse in the transformer primary, and wired the meter's original Battery/External Power switch as the AC On/Off switch (the battery plugs and wiring to the switch had already been cut off). I also replaced the bad filter caps, but left the old can installed so there wouldn't be an empty hole in the chassis. And I left the original rectifier diodes on top, but installed new diodes for a full-wave rectifier on terminal strips underneath.

But it was all to no avail. The power transformer is a very small unit and the high voltage winding is good for around 23ma at 185V, which is the minimum voltage for the 0A2, but the meter and tube together draw about 27 - 28ma. This is pulling the unregulated B+ down and it's not enough to keep the tube glowng. Long story short, I either need a better transformer or just run it unregulated. The latter is cheaper so I pulled the tube and added a 2000Ω resistor in series to drop the voltage to approximately 140V. Close enough.

​Lastly, the filament voltage out of the power supply was at 7.1VAC with the frequency meter connected, so I added a 1Ω resistor in series with the output, which lowered the voltage to 6.25VAC.
Page created 11/5/2020
Last Edit 12/9/2020
Powered by