This is a bit of a rare find, at least here in the states. This WWII receiver was manufactured by the Radio Nicolaus Eltz company in Vienna, Austria, which produced these sets from around 1938 until the end of the war. Information online* states that this model was sold both to civilians and the German Wehrmacht, which used it as a moral and propaganda radio, but there is no universal way to tell if a particular radio was used by the military. The German military did issue two letter codes in late 1940 for manufacturers to use on nameplates (bo for Eltz), beginning at about s/n 33000 for the R2, but this R2 is s/n 19940, which predates these codes.

There is a story behind this radio, that it was used by an American operative working with the resistance in Italy during WWII, and that's how it came to be in the states. But more on that later.

*(an excellent site on the R2 is: https://www.nachrichtentruppe.de/30-alle-kategorien/technik/radiogeraete/97-radione-r2-und-die-verwendung-in-der-wehrmacht) 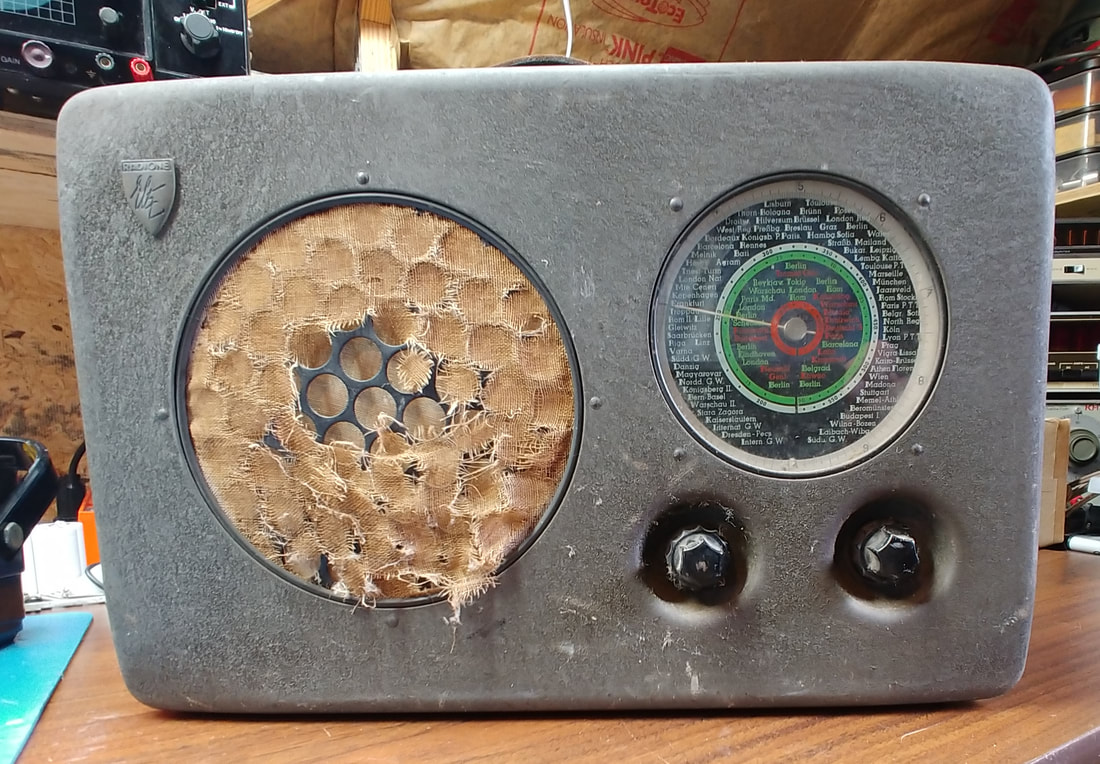 This is the radio as I received it. It's dirty and the grill cloth is disintegrating, but overall it's in good condition. I was told by the person that gave it to me that it was in working condition when he got it, but I've made no attempt to power it up yet. 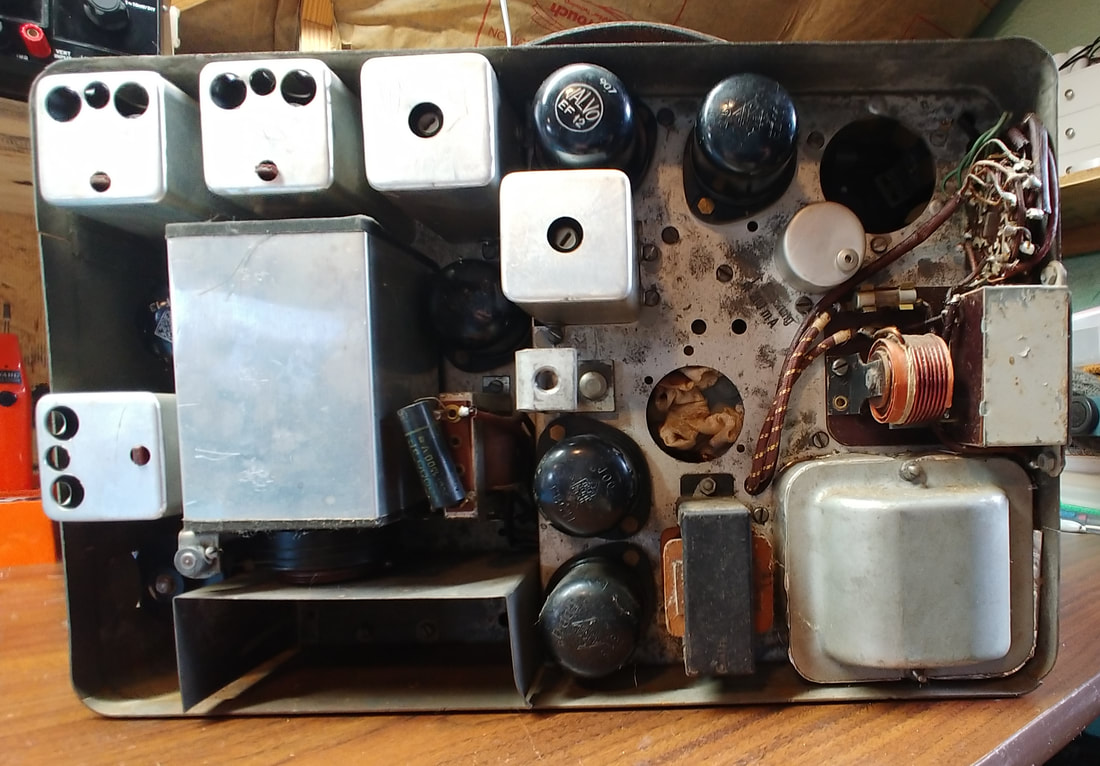 Inside the receiver is also in decent shape. Lots of fingerprints etched in the chassis plating, but the only rust I see is a few small spots in the storage compartment, caused by mice (the compartment door was stuck open). This is a six tube set, but several of the tubes have dual sections inside, and it's said to be a very sensitive receiver with good sounding audio.
The band switch dots are color coded to match the dial band colors and the dial is filled with station locations.

​There are two labels on the bottom of the radio, the manufacturer's nameplate and a 1945 control mark decal. I assume the control stamps are some kind of government regulation, but I haven't found a good online explanation yet.
The right side has the antenna and ground jacks, plus what I think is a thumb wheel tone control. And on the left side are the power input connectors. ​Sliding the door closed on the AC opening exposes the two jacks for connecting 6VDC.
The AC voltage to the set is selected by rotating the AC connector to the proper labeled voltage before inserting the plug.
Here's a couple of the metal tubes. Both of these are RF pentodes. 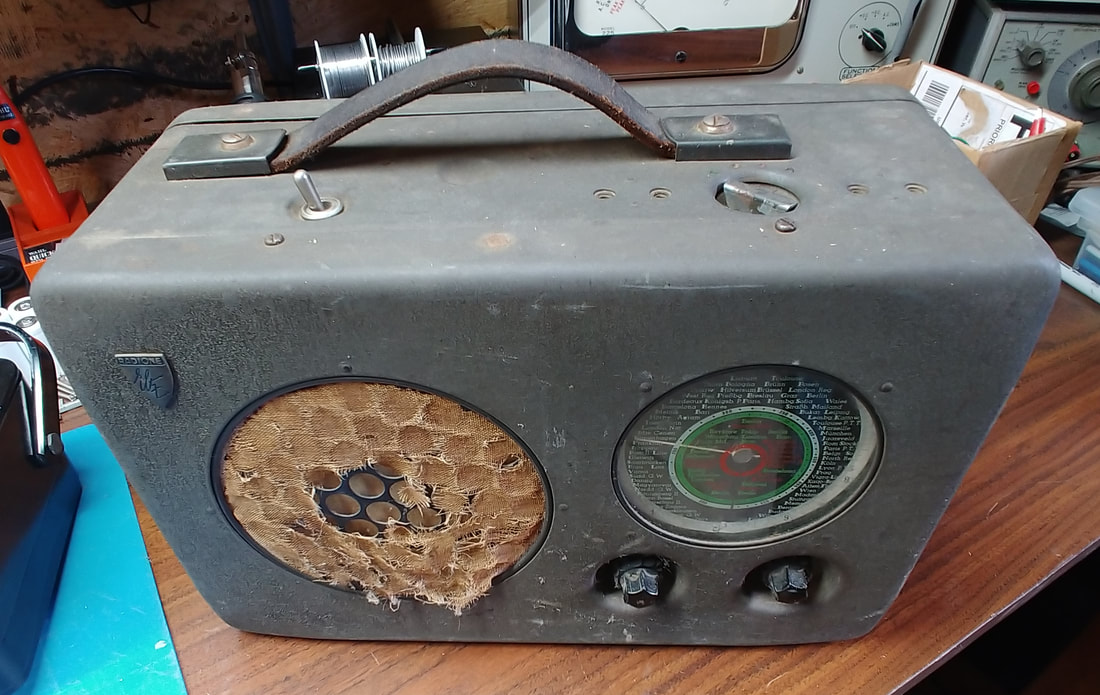 On the top are an On/Off switch, headphone jacks, ext speaker jacks, and the band switch. The metal case is painted a wrinkle finish grey.
Page created 5/9/2020
Last update 5/12/2020
Powered by