This 563 is serial number 161 and has an orange ink stamp (SC 225 A) in the upper left corner, like stamps I've seen on some WWII military gear, so looks like this one was made for the military.

​According to the 1945 war time catalog it was possible for a service shop to order one of these, but there was a three month wait involved, and its advertised price was $56.15.
And it has a nice output transformer that can supply a balanced output for push-pull inputs, or unbalanced for single-ended, at 250, 500 and 5000 ohms impedance. Although the generator's circuitry is nearly identical to the model 561 generator, the 561's output impedances are a bit different - 50, 500, 5000 and 50000 ohms. Turning up the signal on the 563 with nothing connected to the output causes the output transformer to "sing", so it's probably a good idea to keep the output low with no load.

The front panel controls include a calibration adjustment, output level control, and a neon pilot lamp that can be switched to act as a zero beat indicator when calibrating. This is another difference with the model 561, where a meter is used for zero beating the two oscillators.
What's under those aluminum cans - besides coils and capacitors, these two cans each have a 50KΩ resistor that I replaced. One measured 57KΩ, not too terrible, but the other one was 118KΩ.
In the good old days components had nice long leads for point-to-point wiring, but not so today. I had to extend the leads on two capacitors to be able to reach their tie points. One capacitor that is clamped to the chassis has one lead that goes through a chassis hole to a coil on the top side, while the other lead wraps around the output control and ties to the top terminal. I had to extend both of those leads.
The B+ out of the filter choke on the 561 generator schematic is +250VDC, but the Supreme 563 schematics claims the B+ out of the choke is only +135VDC. None of the DC voltages I measured match these schematic voltages. The Supreme schematic claims that 300VAC on the full-wave 6X5 rectifier plates only gives +137VDC out at the cathode. That would be one heck of a voltage drop across the tube. The DC output actually measures 365V. I added a 60Ω 5-watt power resistor in series with the power transformer primary to lower the voltage to around 110VAC. This brought the B+ down to about 350VDC.

The only correct voltage marked on the schematics is the AC voltage at the 6X5 plates. I also measure 300VAC on each plate to ground. And just using some simple ohm's law shows the other schematic DC voltages aren't correct or even in agreement with each other, so the only explanation I see is that the voltages on the 563 schematics are in error.

I also installed a fuse in the power transformer B+ high voltage winding, from the center tap to ground, because 6X5 rectifiers have the reputation of the cathode shorting to the heater, which shorts the B+ to ground and can potentially burn out a power transformer winding.

There is one extra component that's not on the schematic. It's an old style 150pF ceramic/mica wafer capacitor in the fixed oscillator circuit, and it is neatly soldered so it could be original. It's definitely not one of the tack-soldered add-ins.

Checking the oscillator frequencies I discovered they are are running in the 193KC range, not 209.5KC as specified in the alignment instructions. I tried adjusting them but they top out out at around 194KC. This made me suspicious of that extra cap in the fixed oscillator circuit so I removed it, and now it can be tuned to 209.5KC. But the variable oscillator is still at 193KC, so I removed its shield can again to see what cap is in it.
Checking the mica capacitor, which was the reason for opening the coil can in the first place, it is .001uF as shown on the schematic, so it should be oscillating around 209KC, but it's not. It seems to test OK but I replaced it with another .001uF mica cap, and the frequency went up to about 230KC, which is a bit too high. An extra 330pF capacitor added across the 5KΩ cathode resistor under the chassis brought the frequency down to the 209.5KC range. The original problem might have been the .001 cap or a bad solder joint between the cap, the coil and the trimmer, but I'm not putting it back in to test my theories.

​So it looks like there was a problem in the past with the variable oscillator frequency. It was too low at around 193KC and apparently whoever worked on it couldn't figure it out, so they added the extra cap to the fixed oscillator to bring it down to 193KC too. If I hadn't found the original schematic and the alignment instructions, I would never have suspected it was off frequency, that there was a problem in the variable oscillator, and that someone changed the fixed oscillator frequency to "fix" it. 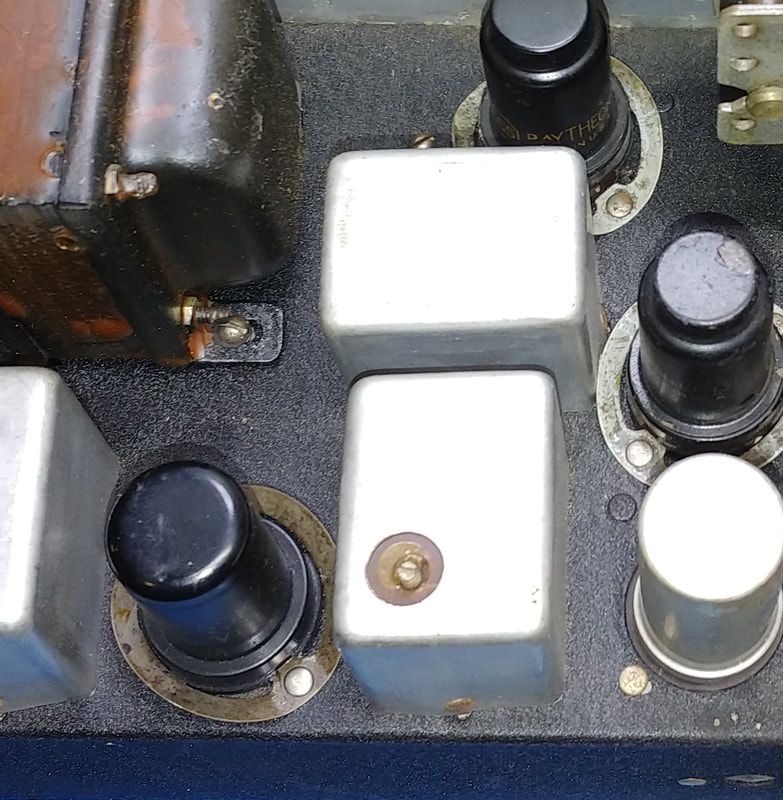 Beware of the adjustment screw on the metal can in the photo. It has B+ voltage on it and is not grounded like the other two adjustment screws. In the 561 a different trimmer capacitor is used, with an insulating washer on the screw so that it is not "hot".
The steps for zero beating the oscillator in normal use are:
- Set the main tuning dial on 0
- Set the Pilot/Zero switch to Zero.
- The Zero lamp should illuminate. If the lamp does not then either the oscillators are already in a zero beat condition (you can check this by simply turning the Calibrate control) or the Output control needs adjusted to a higher level until the lamp illuminates.
- Adjust the Calibrate control for zero beat.
- The Pilot lamp will extinguish when zero beat is achieved (I also use a pair of 250Ω headphones connected to the output transformer to listen to the audio signal and the zero beat).
- Switch the Pilot/Zero switch back to Pilot.

​The oscillator is now calibrated and ready to use. 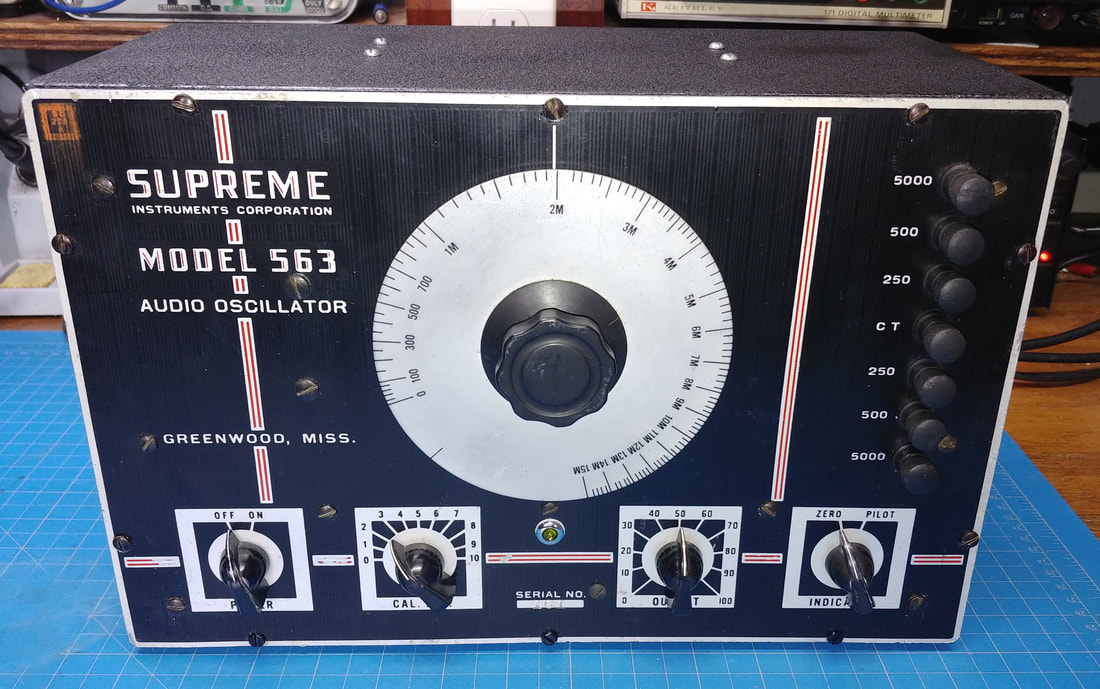 All back together again. The top handle was already missing when I bought the set and I haven't found a replacement yet.
Page created 3/17/2021
Last update 9/8/2022
Powered by