This little 1970's scope is newer than some of my other test equipment, but still has some age on it. It only has one IC that I can see, a UA723 voltage regulator in a can, but approximately 123 Sony transistors. It's a 10MHZ dual channel scope with a 300ns delay line built in. It has a Ni-Cd battery pack and can also run from external 12 VDC as well as 120VAC. The inputs for the scope are on the left side.

I picked it up at a hamfest for not much money due to its condition, but it did have a trace on screen when I bought it. The trace lasted until about the time I got home and then faded away. It was there just long enough to convince me to buy it. After opening it up and seeing how butchered the power supply was, I'm amazed it ever had a trace at all. 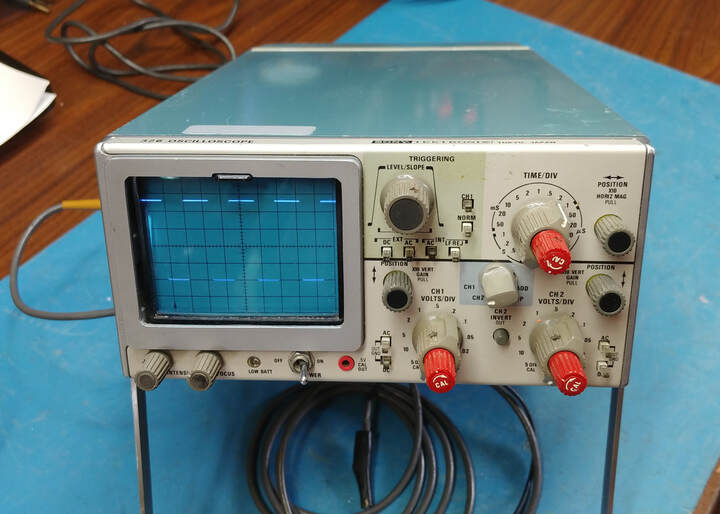 It's working now and initially calibrated to the point of being usable, but still needs more in-depth work and calibration to truly call it done. Just need to find enough time to put it back on the bench. 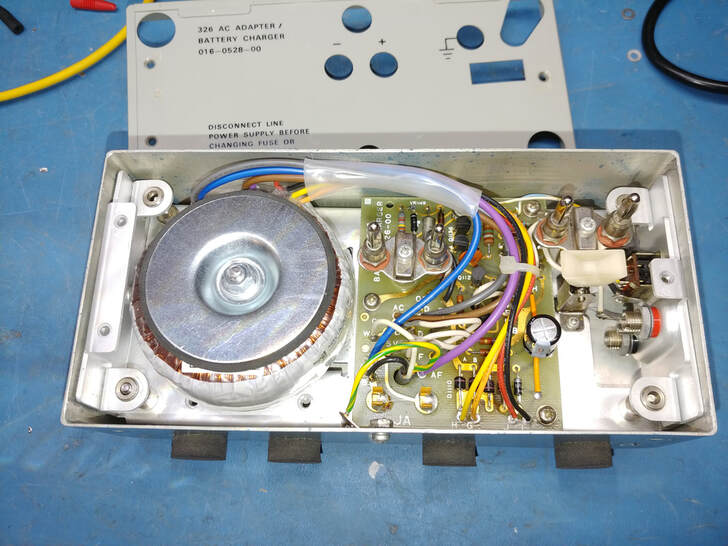 This ol' scope has had a rough life. I've been using it off and on over the last year without issue, but now a new problem has popped up. Both the primary windings in the charger unit's power transformer are open. But no worries, the windings went before the fuse, so it's just fine. The hundred dollar part will save the 50 cent part every time. I suspect that from all the power supply issues this scope has had before I got it that probably one of the two primary windings was already open, and its been running on one lung, so to speak. And now the second has given out, maybe from the demands of the new battery pack.

Fortunately I found a new replacement transformer. Tektronix didn't mark a single voltage on the schematic for the charger so I had to experiment a bit to see what voltages I needed from the two secondary windings. The closest I could come in a generic transformer, that would fit in the same space, was a toroid with dual primaries and dual 12-volt secondaries. This is not a 24VCT (center tapped) secondary, but two separate 12 volt windings. It's an Avell Lindberg Y236102 from Parts Express and worked in circuit without needing any modifications. Just had to reset the charging current.
Page created 9/25/2019
​Last edited on 3/21/2020
Powered by