Although I have several very capable RF signal generators, what I don't have and need is a vintage sweep generator. I want to pair it with my Vedolyzer to see how the combo performs at IF alignments on AM radios. I would have liked to find a Supreme sweep generator such as the model 561, but I don't know how long that will take, so I picked up this military version of the venerable Hickok 288X, which has the needed sweep capabilities.

It's in good condition, just a bit dirty and covered in the usual cigarette smoke residue. The cabinet has some paint loss and scratches, but the front panel controls are smooth, nothing is missing and it should make for a fun restoration.
Front and rear of the generator. Some scratches and tape residue on the cabinet but nothing too terrible. And the worst I see on the front is some writing with a permanent marker, a couple of small scratches, and a former owner has engraved his name into the panel. Why do people do that, was he planning to take it with him when he died?
I'm happy to see the inside is very clean and so far everything appears to be original. Doesn't look like any untrained hands have been in this one. The green on the panel is just light reflecting off it.
I want to remove the handwritten frequency ranges on the Band Selector dial. I wouldn't mind them so much if they were neatly done, but they're not. It took some testing to find the right chemical, but acetone did the trick, applied with Q-tips. Now there are only ghostly vestiges of the ink and I'm going to leave well enough alone at this point rather than risk marring the panel trying to get those ghosts off. They'll probably fade away in time anyway.
Resistance measurements were off in the attenuator, so I disassembled it to pull the front wafer out of it's shielded enclosure. The 470 ohm resistor is discolored and measures 735 ohms now. It's been overheated so I guess someone didn't pay attention to the caution note about this in the manual. If connecting a 288X to a point with DC voltage present, it needs a DC blocking capacitor in series with the output lead to prevent overheating the generator's attenuator resistors. 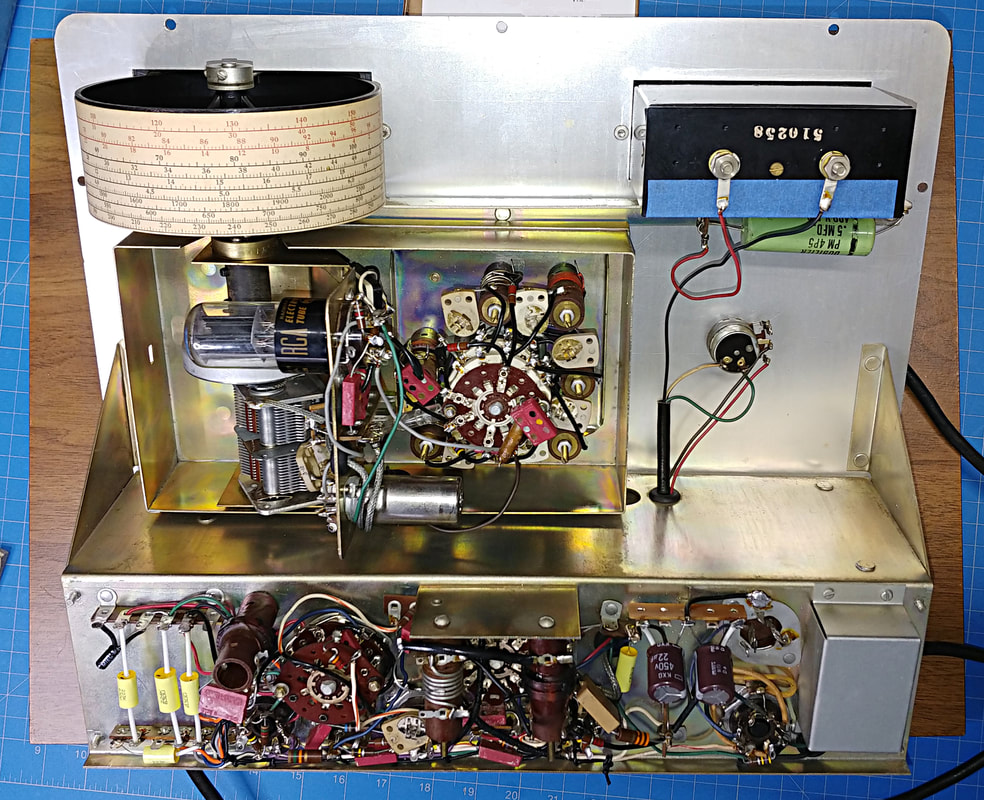 I checked all the tubes as I finished up and noticed they all test very strong and all the metal ones have the same 6035 date code. This makes me think the tubes may be original from the factory and that this unit does not have a lot of time on it.

Now the shields need to be reinstalled so the calibration can be checked. The only sign of rust I've seen anywhere inside is just on the toothed washers under the screws and nuts that attach the shields, so I'm replacing them with stainless steel.
Aligning Bands A thru D was fairly straight forward and none of the bands were very far out. I used my frequency counter to do the adjustments, adjusting the coil core at the low end and the trimmer capacitor at the high end. After alignment all the dial readings I checked were less than 500 Hertz off, and most were less than 100. And after only about five minutes warm up the oscillator is very stable.

The RF output on the top end of Band E, and on Bands F and G, were too low for my frequency counter, but I was able to finishing aligning Bands E and F using my LM-21 frequency meter. I wasn't able to find harmonics for the alignment points on Band G so I plan to purchase a TS-323 frequency meter, which has a frequency range from 20MHz to 450MHz, and then I can recheck bands F and G with it.