The HDX110 EQ-G is Orion's version of the EQ-8. I replaced my Orion Atlas with this mount because of the 110 lb payload capacity and because it is compatible with EQMOD just like the Atlas. 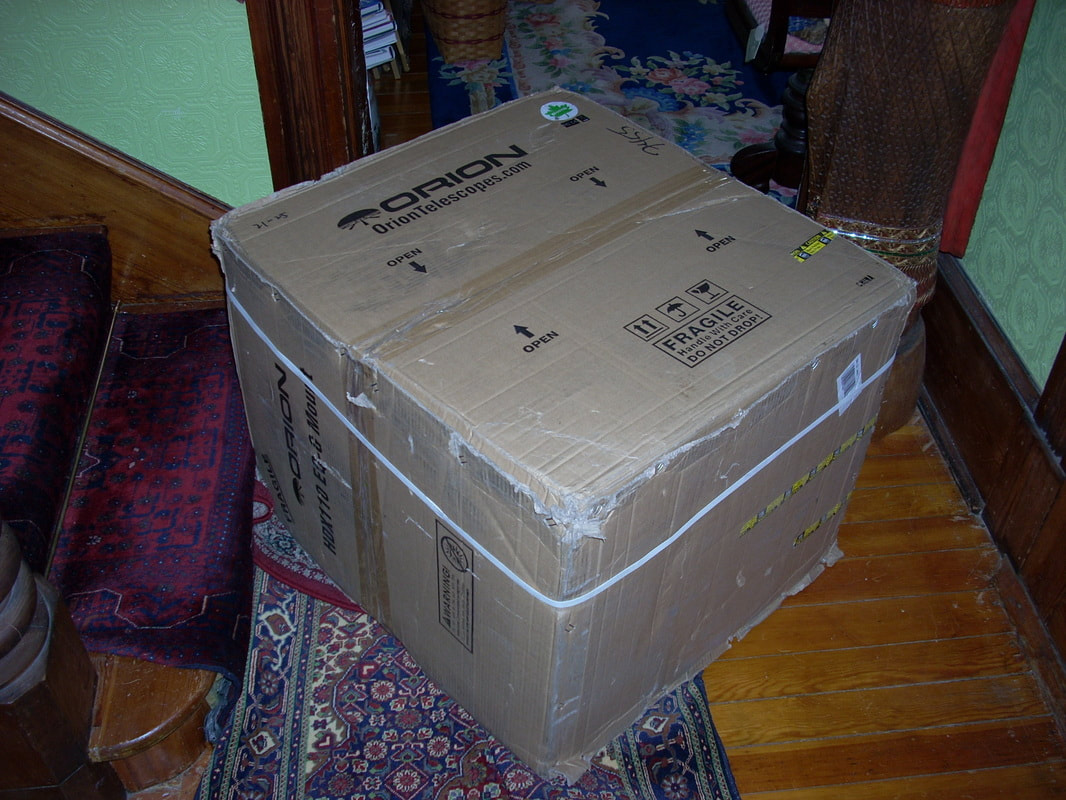 Gee, I wonder what could be in the big, heavy box the UPS guy just dropped off! 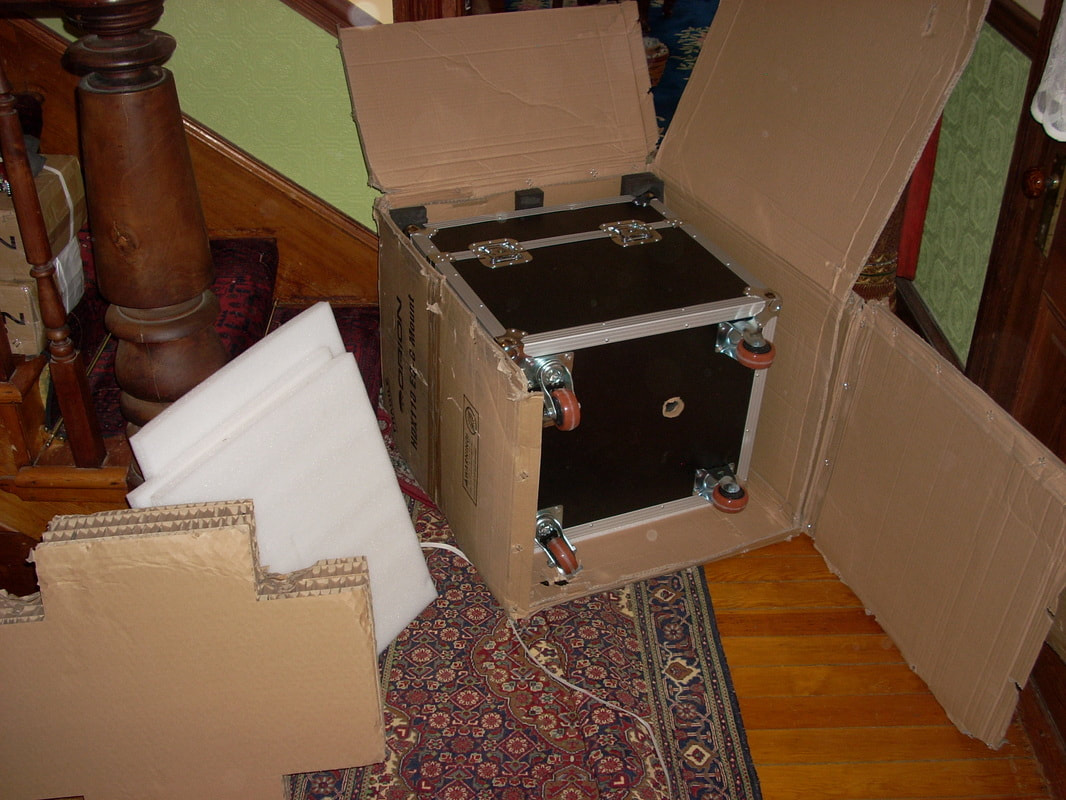 Wow, what did UPS do, air drop this thing without a parachute? Kind of gives the term "drop shipment" a new meaning... 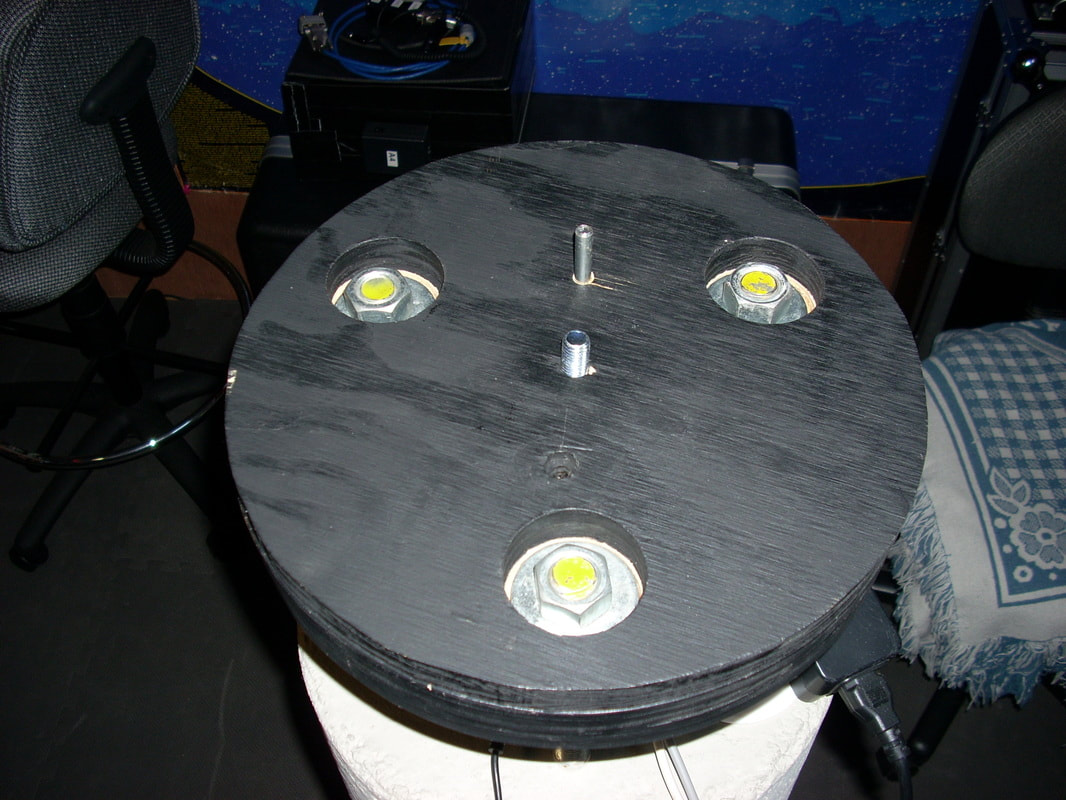 Their isn't enough space between my pier bolts for the HDX110 base so to get a flat surface with no bolts or nuts protruding I modified the pier plate by countersinking the bolt washers into the existing 1-1/2" thick plate and then adding another layer of 3/4" plywood on top as a spacer.

I also moved the azimuth adjustment pin to the south side of the plate for the HDX110 (the pin was on the North side for the EQ-6). The pin is made from a long 3/8" bolt with the threads cutoff. 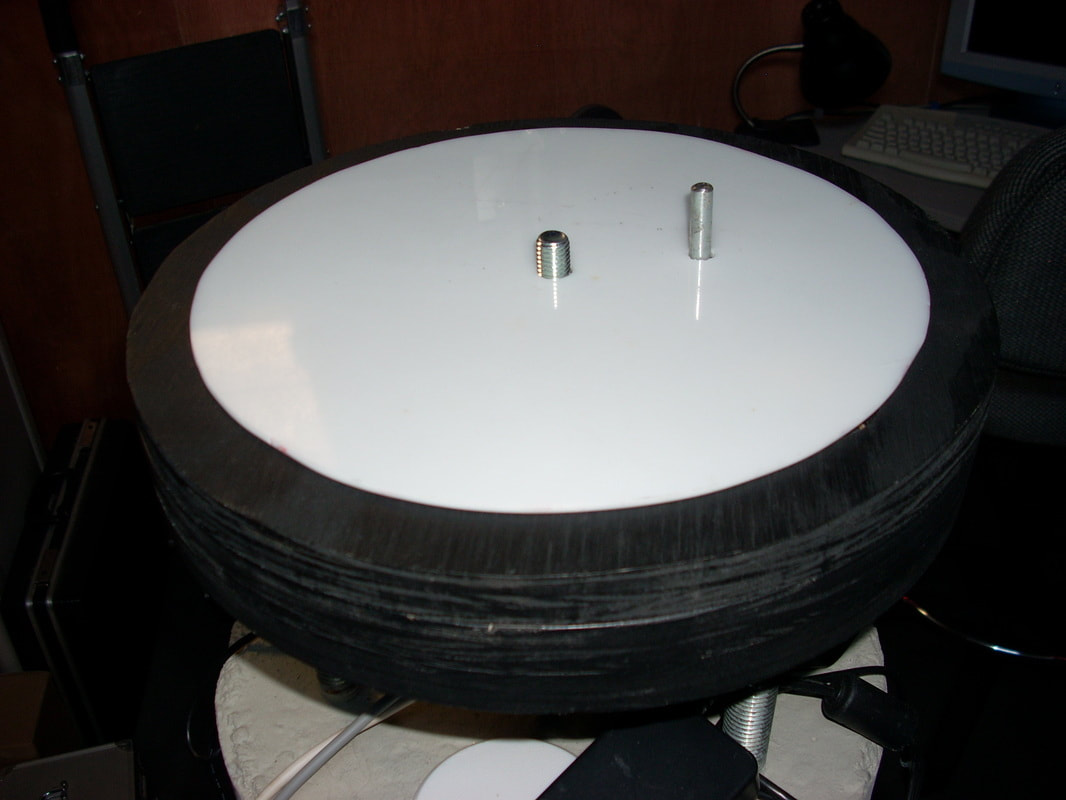 I cut a circle (more or less) from some smooth white acrylic plastic for the base to rotate on when making azimuth adjustments. Does the same job as the pads on the HDX110 tripod. 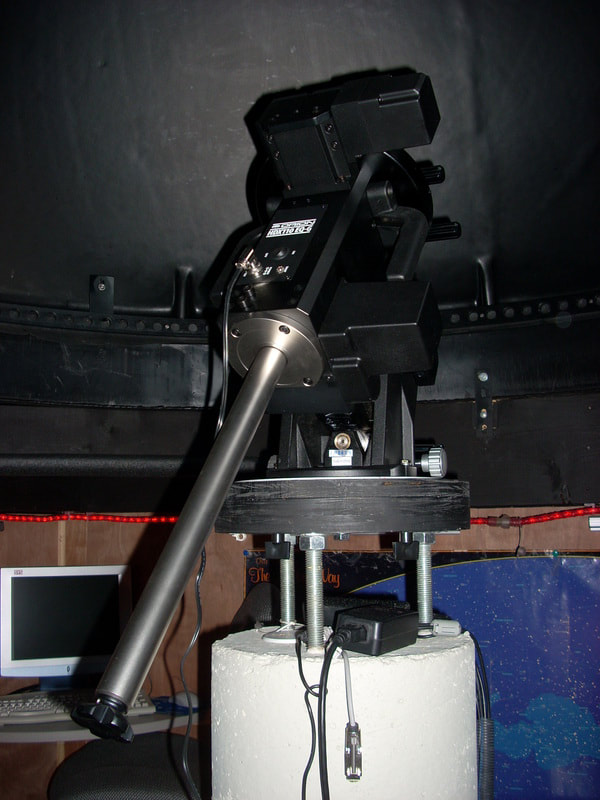 The HDX110 mounted on the modified pier in my Exploradome. The EQ-8 actually sits lower than my EQ-6 did because it was mounted on a 4" extension. Because of this I can't view as low on the horizon with the EQ-8 but I have so many obstructions around the horizon at this site it's not an issue.

The wooden pier plate and acrylic disc insulate the head from the pier bolts so the mount is grounded only through the power supply ground. According to online posts I've read, isolating the head from the pier should help protect the mount from nearby lightning strikes (ground currents through the pier's rebar). I actually had a lightning strike in very close proximity to our house a few years ago and it took out most of the electronics in the house that were not either unplugged or isolated on a UPS. I'm trying to avoid any possibility of repeating that nasty episode in the obs.

Some posts on the EQ-8 Yahoo group claim the motor controller in the mount is sensitive to over-voltage spikes, so I use a 13.8 Volt 10 Amp linear regulated power supply which provides power only to the mount and cameras - the dome and associated motors operate from a separate supply. 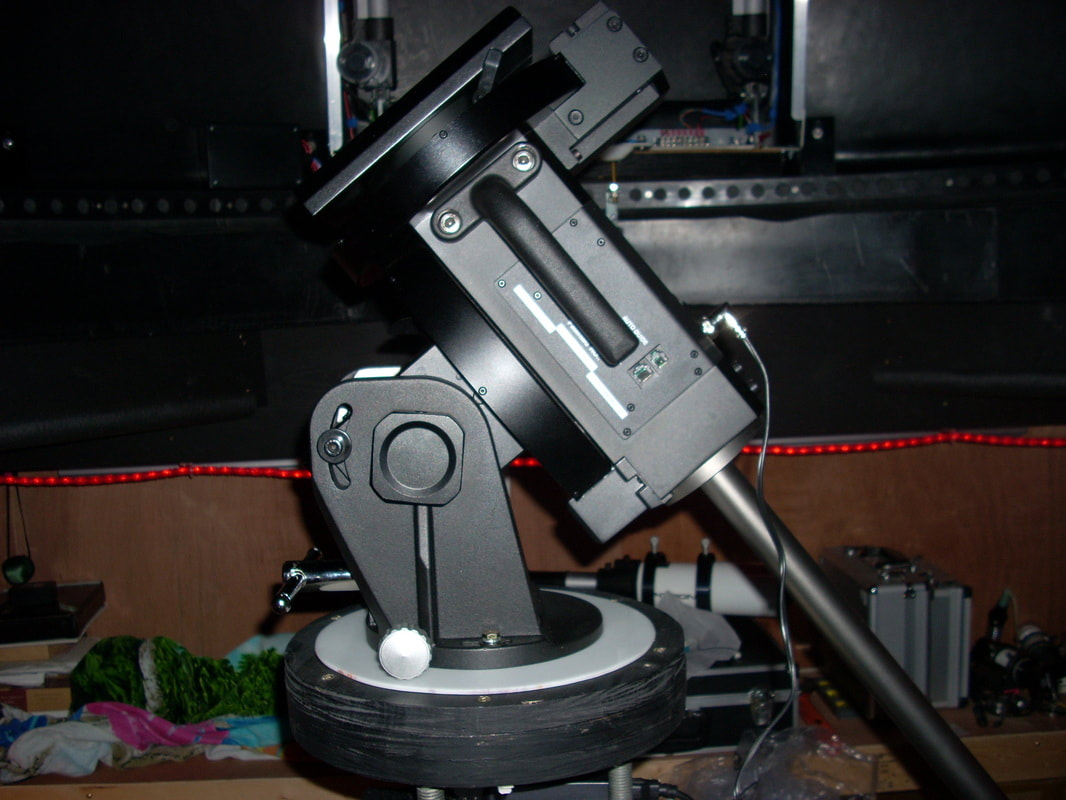 Side view of mount. 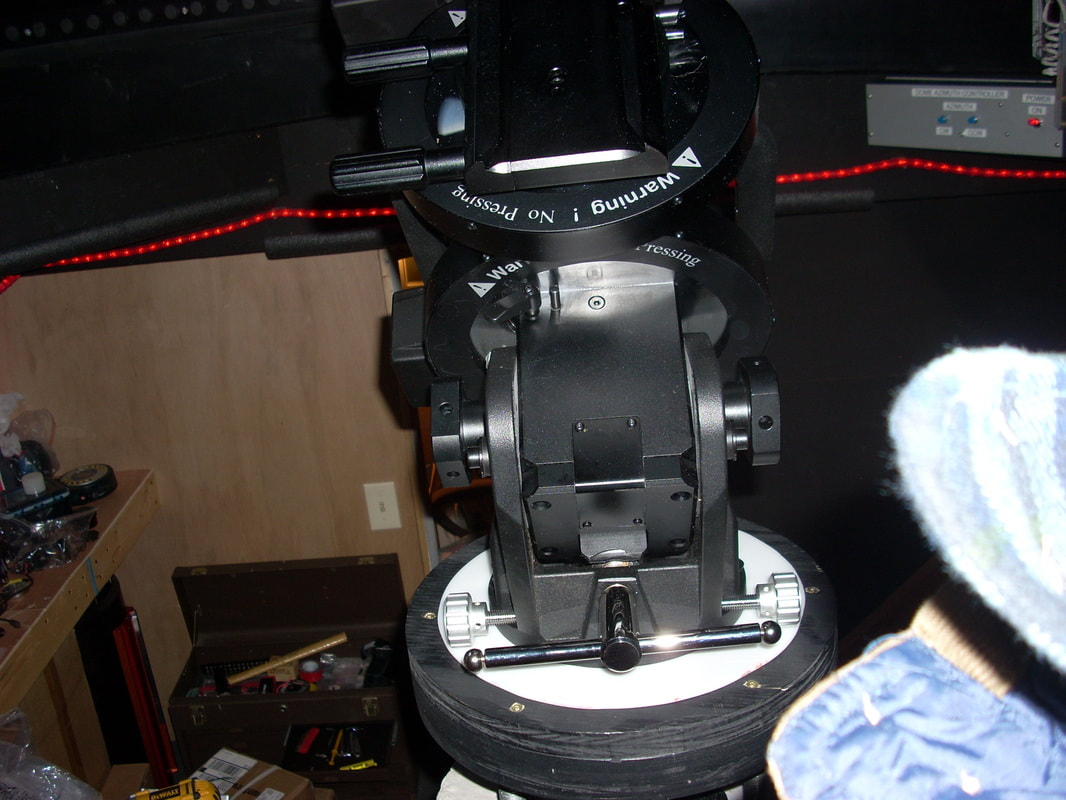 Rear view of mount and altitude jackscrew. The jackscrew (minus the crossbar) is what punched the hole through the case during shipping. 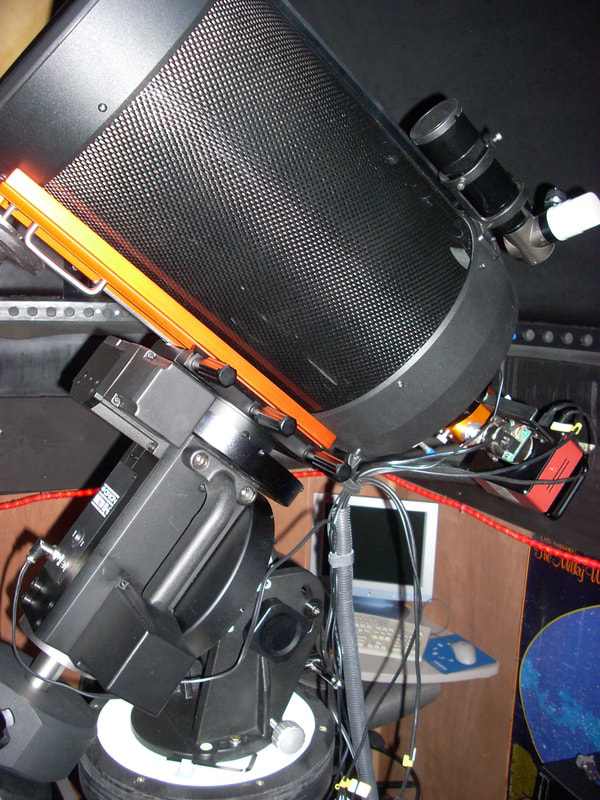 My C-11 mounted on the HDX110 for testing and aligning the mount on the pier. 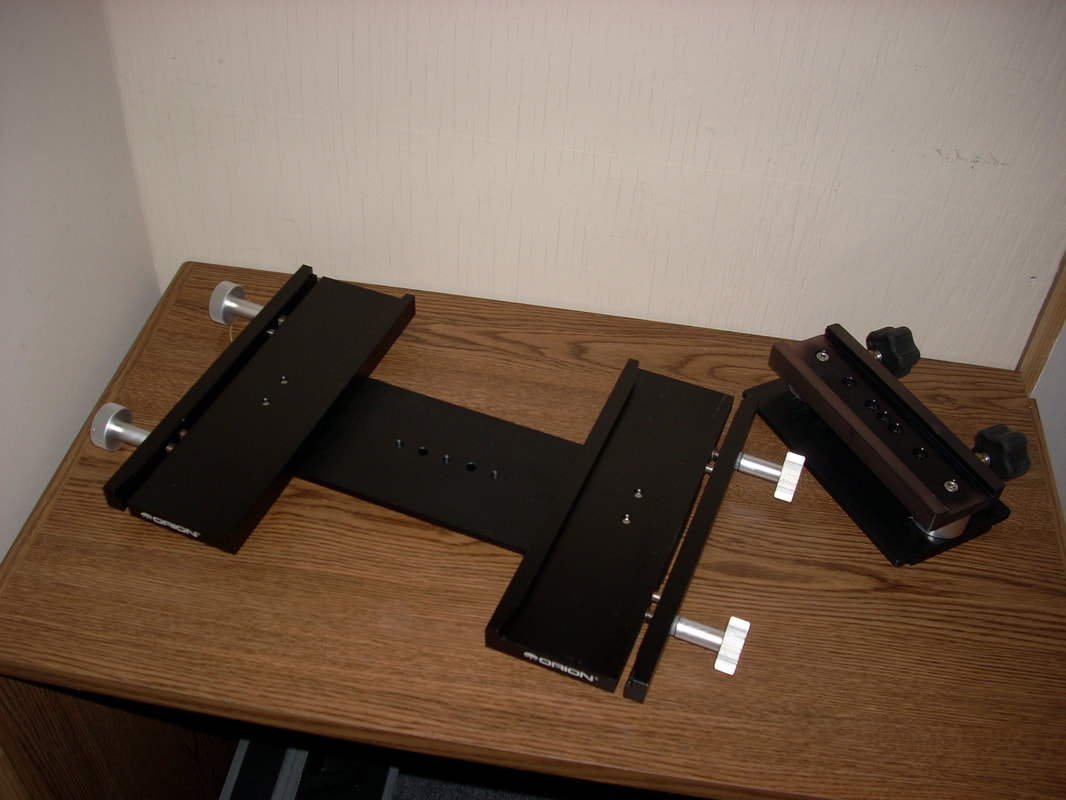 I want to use a side-by-side setup but when the mount was first released it did not play well with a typical side-by side setup which rotates the scopes 90 degrees. So I modified my side-by-side adapter to keep the scopes pointed correctly.

I purchased a double D-style side-by-side adapter plate on sale from Orion and I already had the pictured Farpoint V-to-D adapter.

Some months after I made the adapter I read that Skywatcher corrected the controller software so the EQ-8 now works with the scopes rotated 90 degrees. 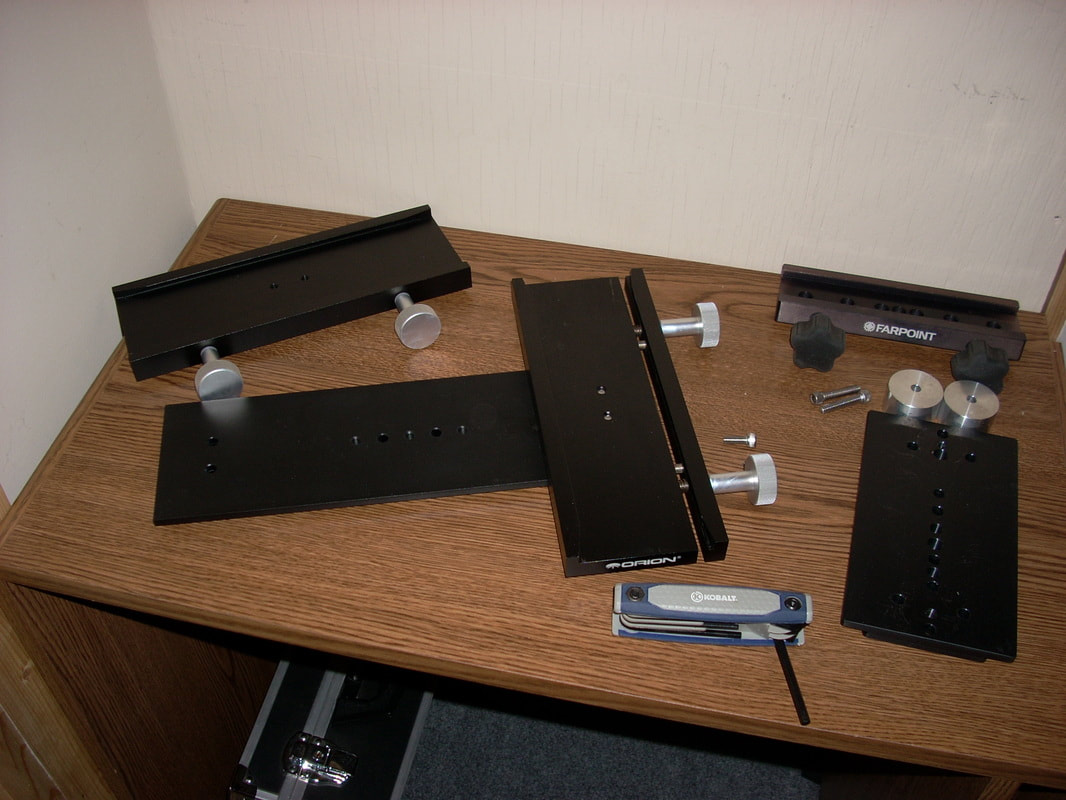 I dissembled the Farpoint adapter to get all the parts needed for the modification. I need a side-by-side setup that has one Vixen (V) saddle and one Losmandy (D) saddle so I removed one D saddle from the Orion adapter and replaced it with the V saddle. Then the short D dovetail removed from the Farpoint adapter mounts perpendicular to the long dovetail of the Orion adapter. 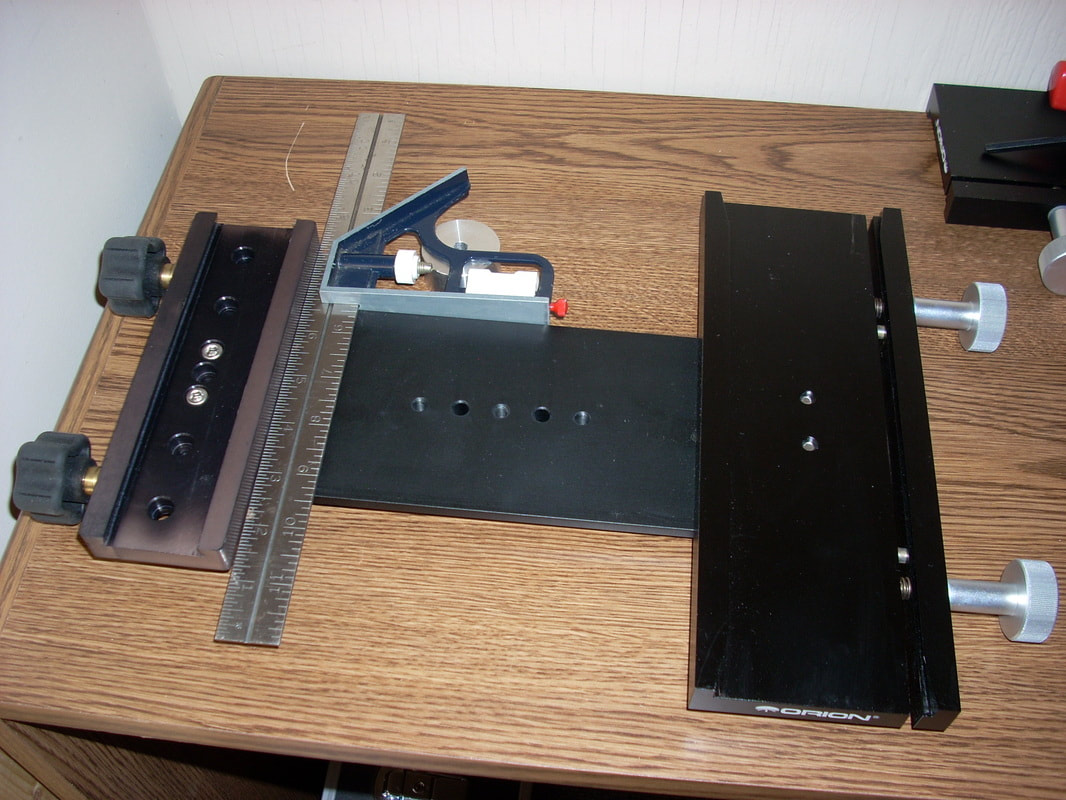 I used a square to be sure the V saddle is perpendicular to the cross plate and then through-bolted the adapter in place using existing holes in both pieces. 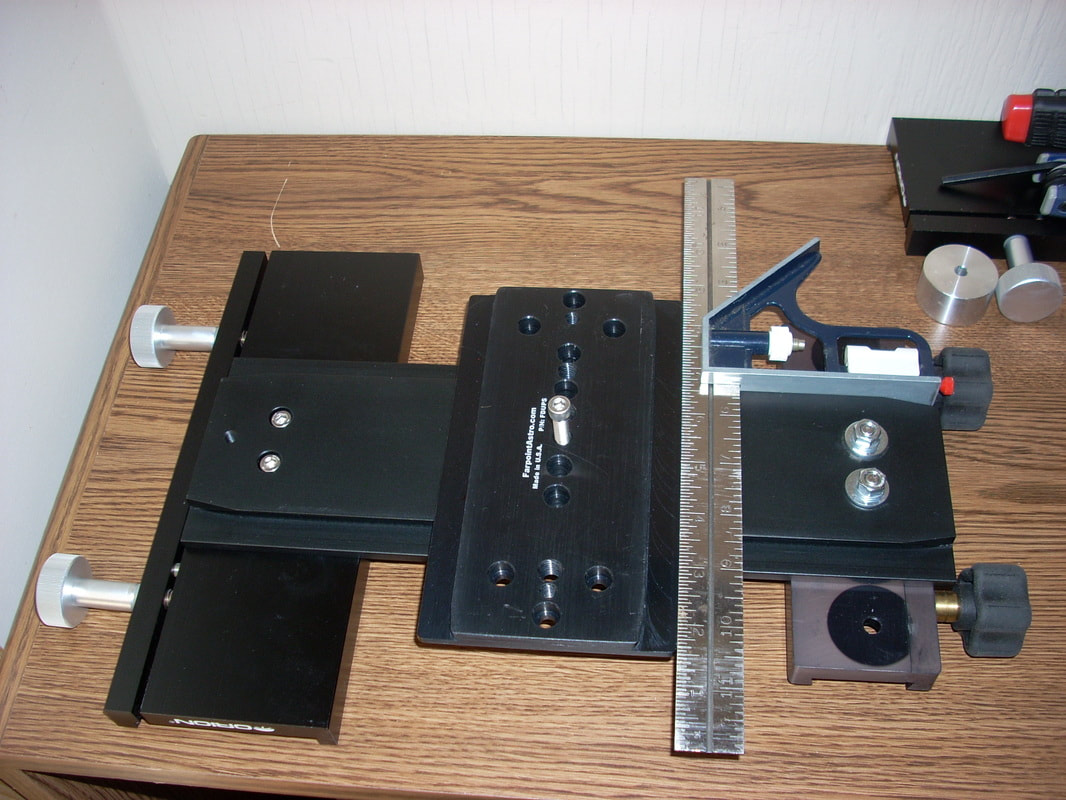 To attach the short D dovetail plate I need to add two threaded holes to the long D dovetail cross plate. Again I used a square to align the dovetail before center punching the holes.

I also need to deepen the countersunk portion of the through-holes in the short plate so the screw heads wouldn't protrude above the plate surface.

The holes were drilled on a drill press and tapped 1/4-20. 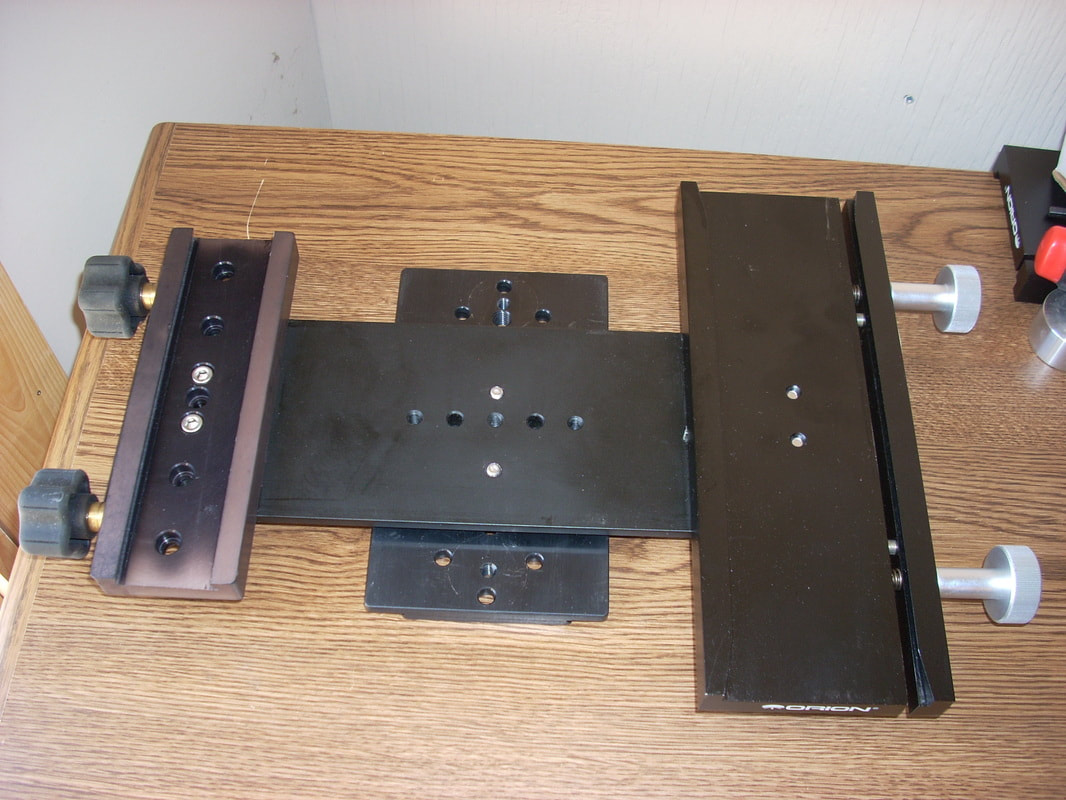 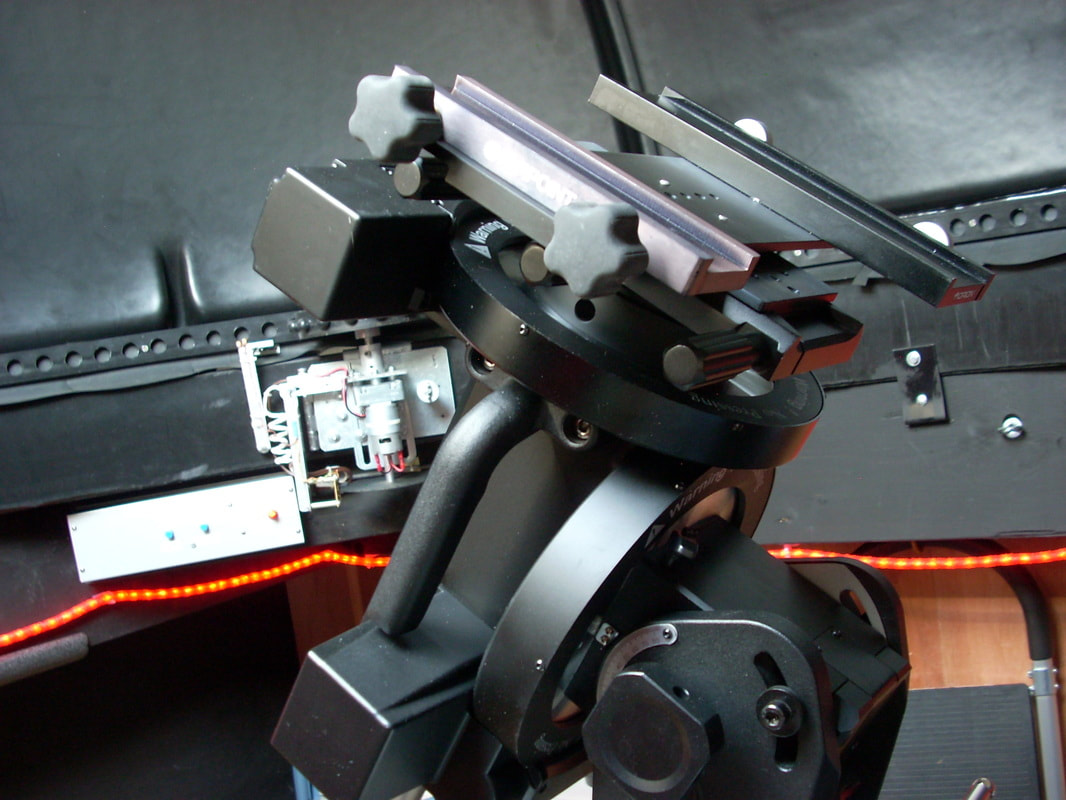 The adapter mounted on the HDX110. Using the short dovetail raises the adapter a bit and provides a little more clearance to get at the saddle screw handles on the HDX110. 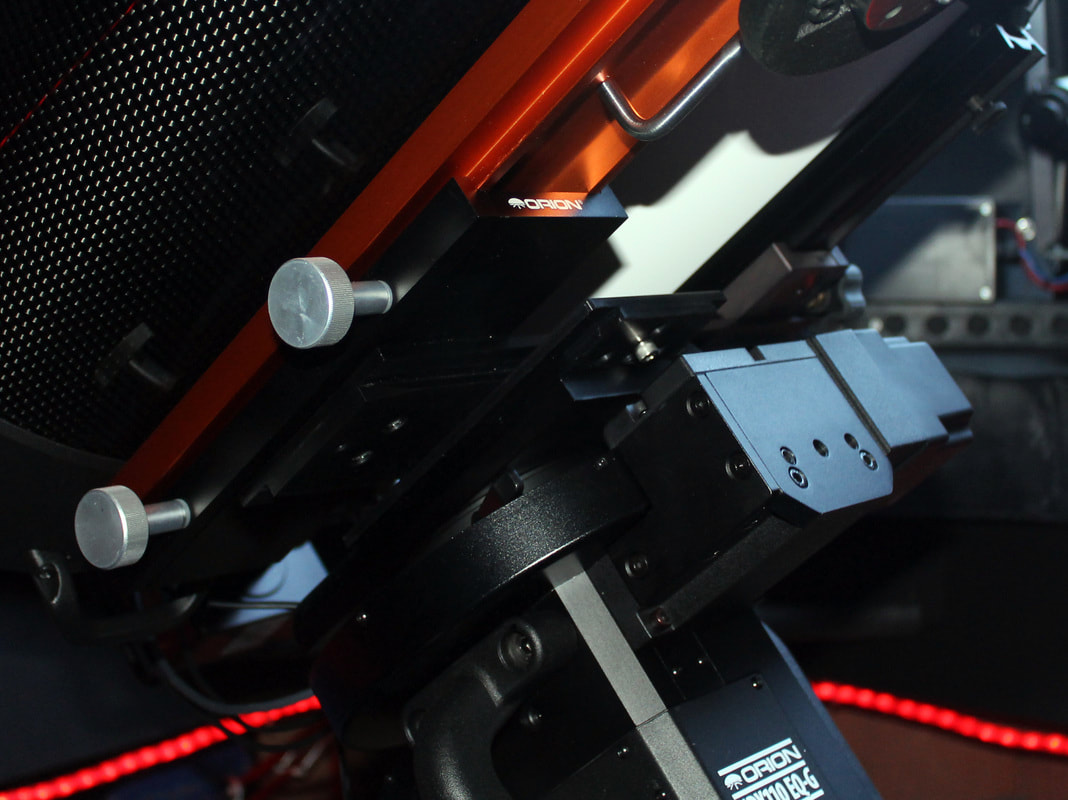 A quick test of the side-by-side with my C-11 and AT6RC mounted quickly showed that mounting the small dovetail centered between the saddles was a problem. The adapter works fine but the C-11 is so much heavier than the 6" astrograph that there's no way to balance the setup, even after mounting a guide scope and about 10-lbs of extra weights on the astrograph. 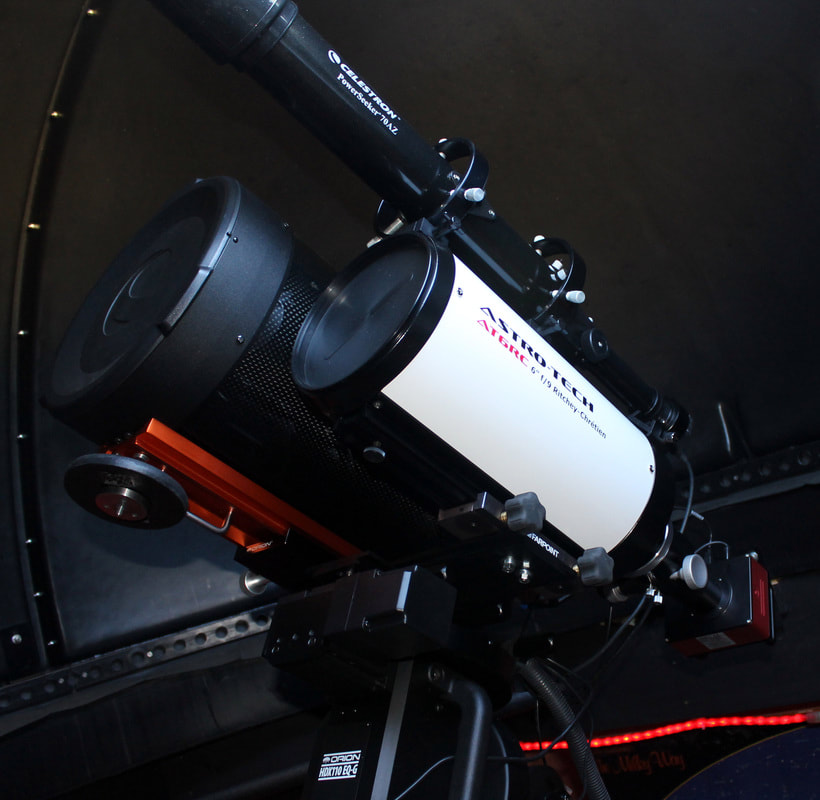 A wider angle view of the setup from the AT6RC side. 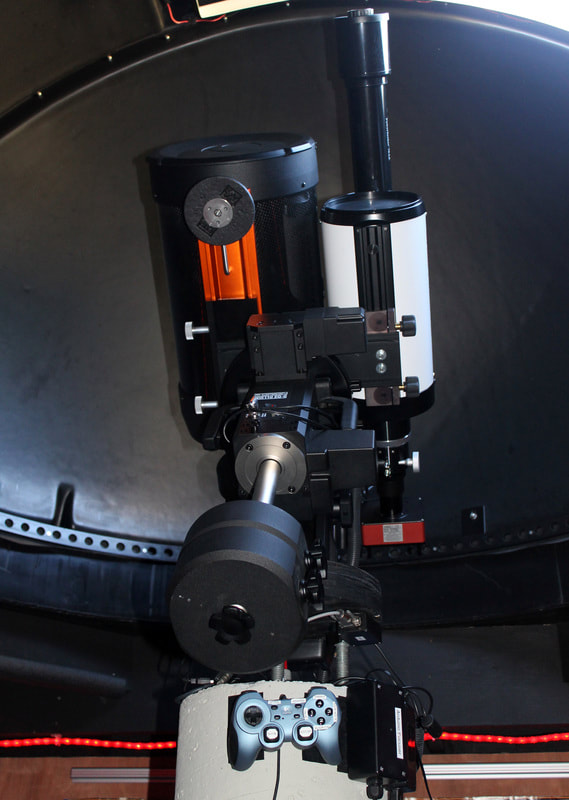 A view from below gives a better perspective on scope positioning relative to the mount saddle. Now I should be able to do visual or astrophotography without any radical changes to my setup.

The only thing left to do is add a few pounds to the counterweights. The two weights are at the end of the bar and I need a little more weight to get the balance right.

Also in the image is the RS-232 to TTL adapter that is attached under the pier plate. This adapter connects the mount to a PC to control it using EQMOD software. The joystick shown is used to control the mount at the pier and is another benefit of EQMOD. 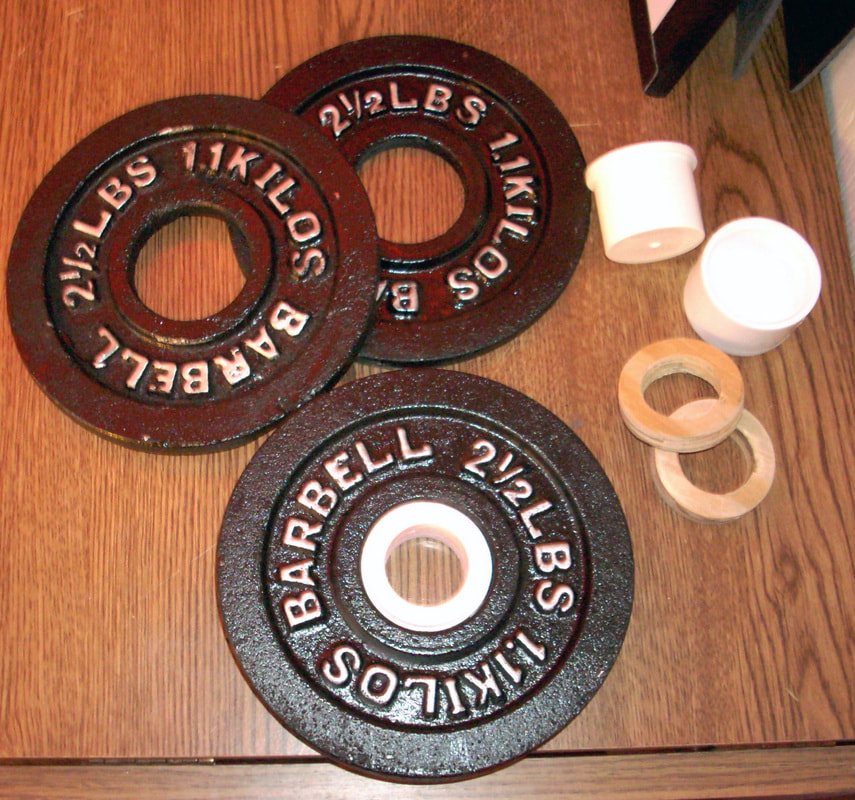 To add some extra weight I used 2-1/2 lb Olympic-size barbell weights with 2" center holes. These came from Walmart and are approximately 6.3" (16cm) diameter x .43" (11mm) thick (Walmart's online description said these were 7" x 1" but they weren't).

To adapt the 2" weights to the 1-1/4" counterweight bar I made several adapters to test, some from cut-down PVC pipe fittings and others from 1/2" thick plywood. They all worked fine. 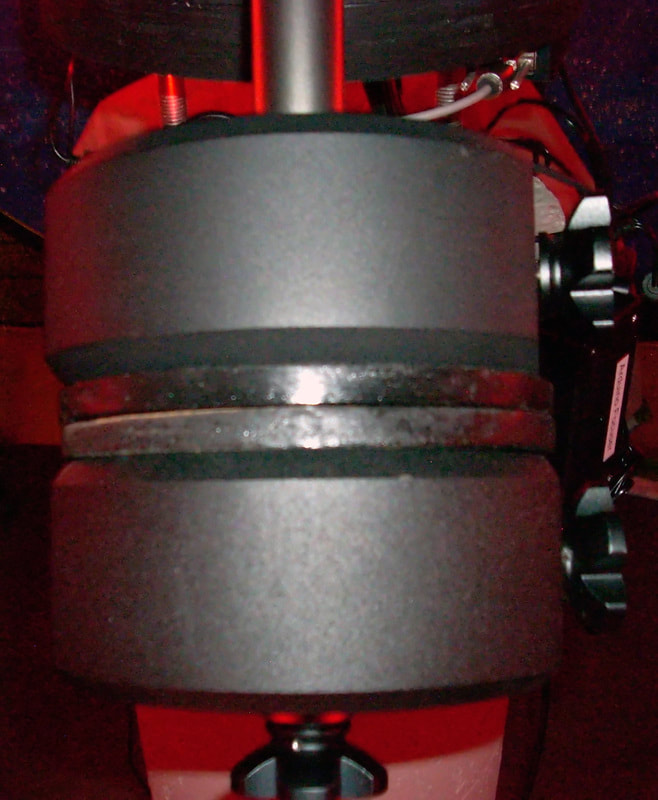 To balance my setup I sandwiched two 2-1/2 lb barbell weights between the 22.5 lb counterweights for a total of 50 lbs. If I had purchased another 22.5 lb counterweight the total weight on the bar would have been 67.5 lbs, so this saves 17.5 lbs of unneeded weight and over a hundred dollars in cost difference.
Powered by