Restoring a Supreme Model 560A Vedolyzer

Supreme described their Vedolyzer as a dynamic signal analyzer that can not only reveal the presence of a signal, and its relative amplitude and frequency, but can also determine the quality of the signal. In another advert they referred to it as a super voltmeter. It's a combination of a VTVM, a wavemeter, a 3" oscillograph, a signal tracer and a multiple monitoring system, and was the foundational instrument of Supreme's dynamic analysis system called "See The Signal".

This was hi-tech stuff in 1939 for servicing radios and amplifiers under actual operating conditions. And with a name like the "Vedolyzer" how much more Buck Rogers can you get.

The Vedolyzer was advertised for use in combination with Supreme's model 561 RF generator, and I'm still looking for a model 561 to use with this and my Supreme model 562 Audolyzer.

FYI: Check out Mr. Carlson's Lab on YouTube where he has a 4-part series on restoring a Vedolyzer, and as always he does a masterful job. His videos will be a great reference for restoring this one.
This instrument is S/N 101. I'm not sure where Supreme started with serial numbers (companies didn't always, or even usually, start with 1), but regardless this is a fairly early "A" version, probably dating to mid or late 1940. The front panel is in very good condition, no big scratches or dents, and will clean up nicely. All the knobs are there and the only things that might need changed are the obsolete Amphenol microphone-style input connectors.

The manual available online for the 560A is from S/N 364, the one in Mr. Carlson's videos looks to be in the 400's, and I've seen a photo online of another in the 500's, so Supreme made many hundreds of the "A" model. Also, the "A" schematic is in the September 1945 edition of Radio Service Dealer magazine (RSD), which is also available online. ​The original Vedolyzer model 560 schematic is dated September 1939 and the instrument was advertised in the Supreme 1940 catalog, which can be found at supremeinstruments.org. The 560A was first advertised in their 1941 catalog, and an ad in the January 1941 RSD offers the 561A Vedolyzer or the 562 Audolyzer in combo with the model 561 generator as a package deal. In the May 1941 RSD Supreme advised customers that the 1941 models would also be their 1942 models, so the 560A was available at least through '42.
And on the right side is the 3" oscillograph with Focus and Intensity controls near the top, the Sync Adjustments and Vertical and Horizontal Gain controls below, and Sweep selector buttons down the side.
I checked the date codes on the replacement Sprague electrolytics and they are all from 1984, and it looks like that's probably about the last time someone had their fingers in it.
​Now I have to try to figure out the pin wiring by peering through the CRT glass to see if I can trace which wires connect to which electrodes. The filaments test good, so it will probably work just fine if I can get it back together. This is why you don't pull on the glass tube when removing a CRT.
This is about as clean as the chrome is going to get, but it's still a lot better than at the start. The video amp will get pretty well stripped down and rebuilt with mostly new components since the old parts have to go anyway, the soldering is pretty bad, and some components aren't even soldered.

Interestingly, the video amp specs of the original model 560 claimed to have 4.5MHz of video bandwidth, but the updated 560A only claimed 2.5MHz. Sounds like the original design didn't live up to expectations.
There are several components in the wavemeter to check and replace. I removed the wavemeter coils and stashed them in a cabinet until I'm finished under the chassis. Too many delicate wires there to take a chance.
In all I found two bad potentiometers. One is the aforementioned Horizontal control and the other is the Meter Zero pot. On it the wiper connection is a coiled "spring" around the center shaft that solders to the center terminal. The spring wire had broken at the terminal, but I was able to solder it back and save the pot.

​The left and right pushbutton racks have been cleaned and are operating smoothly, but I notice on both sets that there were originally rubber pieces around each shaft at the inside tops of the plungers, to keep them from hitting the frame with a loud 'clack" when they pop up. I'll see about fabricating replacements.
The front panel has been cleaned and polished, and the two pushbutton switch banks pulled, restored, and reinstalled, so now I want to get the front back on quickly to prevent breaking any wires on the components that are just hanging loose without it. I added flat washers under all the potentiometer nuts to protect the front panel finish, with the exception of the Focus and Intensity pots, which are insulated from the front panel by phenolic washer sets. I also removed the internal-tooth lock washers from under the heads of the fillester head screws that attach the front panel to the chassis. The toothed washers were digging into the aluminum panel and ruining the finish around the screw holes. But the original external-tooth washers are still used under the nuts on the chassis side.
While waiting on parts I created a gratiicule using a scan of one from the Supreme site. This one is not printed but cut into a heavy piece of plastic with an exacto knife and then filled with a black paint pen. The lettering is also done with a paint pen. It slips under the three little ears on the front of the bezel. This particular graticule would be for use with the model 561 generator in FM mode. 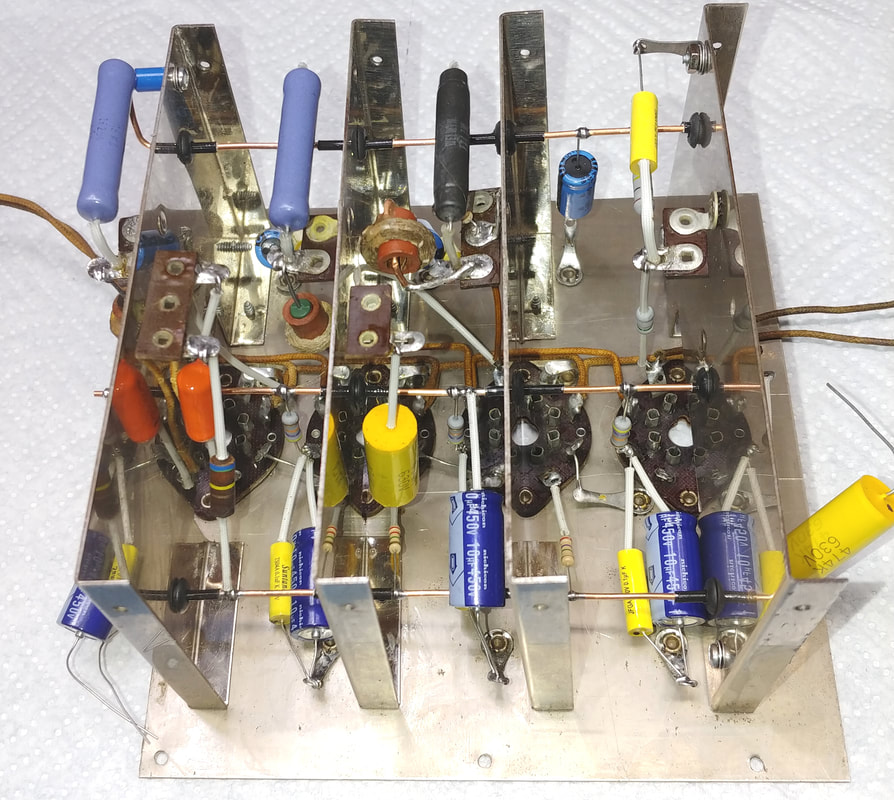 After several late nights at the bench the video amp is finally ready to reinstall. Almost every resistor and capacitor has been replaced. Some resistors were wildly out of spec, double or triple their marked values. A lot of the capacitors had already been changed once, and the orange dip caps are good film caps, but I don't like their radial style leads for point-to-point wiring like in the video amp, so I replaced all but a couple with axial lead film capacitors. All the old hard as a rock rubber grommets were replaced and new B+ and -Bias buses were made from 14awg solid copper wire.

Some of the resistors did not match either the values or wattages shown on the schematic. Thanks to the poor workmanship by whoever tried to work on this, it was fairly easy to tell which components were from the factory just by inspecting the lead wraps on the terminsls and the soldering. All the component differences I found appear to be factory. I even checked Mr. Carlson's videos to compare with his Vedolyzer and he had the same differences I found in mine. So I'm editing the schematic as I go to reflect the changes. 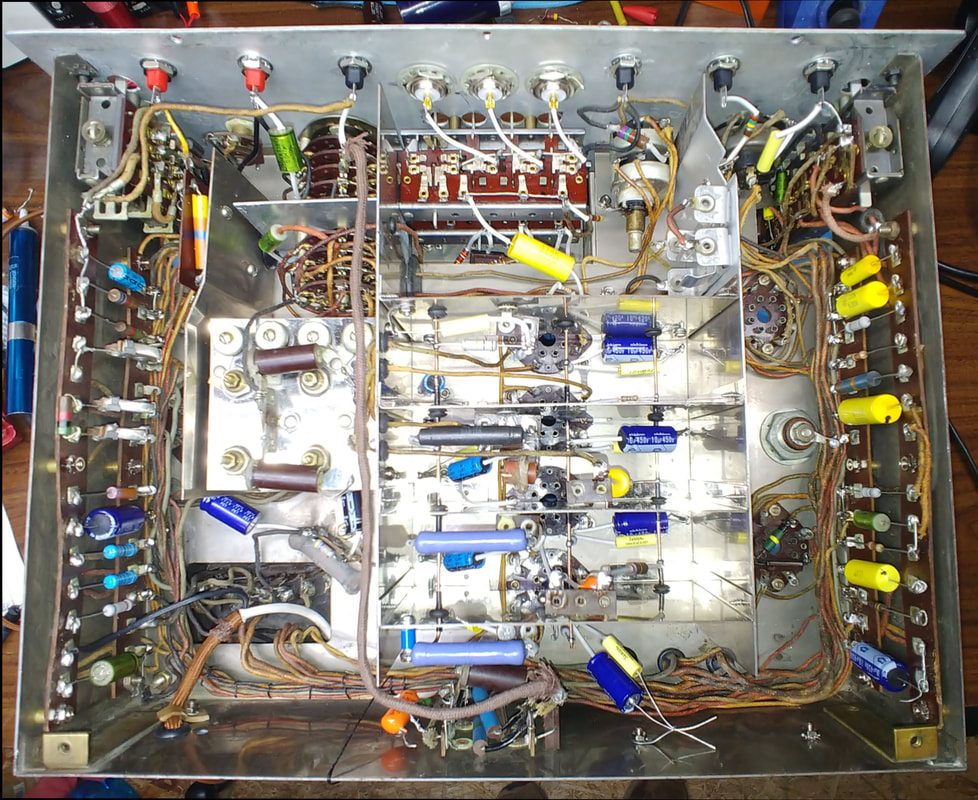 Still not finished, but it's getting closer. I still need to reinstall the power supply choke, solder some connections and re-lace the cabling. This has been a whole lot of work getting it back to this point.

​I changed the three input connectors to UHF connectors because they are a perfect fit for the holes, and adapters to BNC are easy to get. The original single pin microphone connectors are obsolete and not available except used. I will bag the originals and keep them for the unit in case I'd ever want to put it back to factory. I also replaced all the pin jacks with matching style banana jacks, because I don't use or like pin plugs.

I added a 2-cell AA battery holder for the bias batteries. This way I don't have to solder directly to them. The original battery clamp was AA size.
More to come as I get time to work on it...
Page created 6/3/2020
Last edited 7/2/2020
Powered by