The model 562 Audolyzer was advertised by Supreme as a dynamic RF and AF signal tracer and radio analyzer. It contains a 5-band tuned radio frequency (TRF) receiver with a built-in speaker, and the receiver is integrated with a vacuum tube voltmeter (VTVM), and an ohmmeter. The model 562 was manufactured from late 1939 (the 1940 model) to 1947 before being replaced by an updated model 688 Audolyzer.
The Audolyzer's advertised capabilities allow multiple tests to be performed on a receiver:
- check for signal in any stage of a receiver using a single probe.
- measure any voltage in a receiver using the VTVM.
​- determine the unknown frequency to which any receive circuit - oscillator, IF, or RF- is tuned by using the tuner in conjunction with the VTVM as a frequency meter.
​-measure the gain or loss of any stage in a receiver.
- check AVC circuits for the correct applied voltages under actual operating conditions.
- check for distortation by placing the probe at any point in a receiver where audio is present and listen on the built-in speaker.
- demodulated audio signals of IF and RF circuits can be be visually checked by feeding the signal from the Audolyzer to an oscilloscope.
- the Audolyzer can test antenna efficiency by using it as a field strength meter.
- leaky, open and shorted condensors can be found without removing them from circuit.
- the Audolyzer can be electrically divided into two sections and use two probes at a time for testing.
I found two different schematics online, one dated 1939, with a note that it was updated in 1940, has a #80 rectifier and does not have an ohmmeter like later instruments. It also has a bias battery in the first AF amp circuit. The second schematic dated 1946 says it's for units S/N 2100 and above, and shows a 5Y3 rectifier along with the ohmmeter circuit. And the bias battery has been eliminated.

My gray Audolyzer is S/N 2443 and still has a #80 rectifier, so obviously some later units were also made with this older rectifier. Supreme actually stated in their 1941 catalog that their policy was one of "continuous improvements", with later catalogs simply saying they reserved the right to make changes, and apparently they did.
Dating my Audolyzers was a bit confusing at first due to some misinformation online. I read the earliest units had a gray face plate in an oak case, but this turned out not to be entirely true. The earliest Audolyzers, as seen in period magazine ads, had a black faceplate, not gray, but they were in oak cabinets. And the early 1939 schematic, with the 80 rectifier and bias battery in the audio circuit, but minus the ohmmeter and A.F. Input/Scope jack, was limited to just the 1940 model. There are Supreme ads from early 1940 showing the black faceplate that doesn't have the A.F. Input/Scope jack.

Other misinformation I found online claimed that the later units had black metal cabinets and face plates. But this isn't entirely true either. The period ads I found, starting in late 1940, when the 1941 models would have been introduced, show the black faceplate with the ohmmeter and added A.F. jack housed in oak cabinets with handles on the sides. The first catalog I found showing a metal cabinet was in 1947.
So when did the Gray faceplates appear? An original 1947 Supreme catalog I purchased shows all Supreme's big instruments updated with gray wrinkle finish faces and steel cabinets. Gray was apparently the new "in" color for '47.

My gray unit is still in an oak case, and still has an 80 rectifier, so it's possible it is an earlier unit from 1946 that got a gray paint job as Supreme was switching color schemes. Supreme was known for making changes to models throughout their production life.

The 1947 models would have typically been introduced in the Fall of 1946 and the '47 model is the first time the gray face shows up in any of the ads I found. Another clue to age is that in every 562 ad I've seen before 1947, except for the earlier design in the 1940 catalog, both the Audio Output and A.F. Input / Scope jacks are 1/4" phone jacks, and the probe is wired into the unit. But in the 1947 ad, for the first time it shows the Audolyzer with three Motorola-style jacks, just like mine.

​However, I did find a photo of a 562 with a black face that has the three Motorola-style jacks. It looks like the serial number is in the 1800's (difficult to read in the photo), so apparently the change to three jacks came before the change to a gray color scheme. Just another example of Supreme making "continuous" changes during production.
The Supreme 1940 catalog is the oldest pre-war catalog I found online with an Audolyzer listed, and shows a black 562 in a cabinet with the handle on top and it doesn't have an "A. F. Input / Scope" jack, both identifying features of the 1940 model.

The next catalog available online Is the 1945 catalog in which their equipment, including the Audolyzer, is still in the black color scheme just as it looked in 1941.

The 1946 catalog, for the first time, has a description of the 562 that says it has a black front panel with a ribbed background, and also clearly states the Audolyzer comes in a quarter sawn oak case.

And as mentioned above, the 1947 catalog shows the change to the new gray faceplate and steel cabinet for the Audolyzer.

In Supreme catalog number 848, on the first page, it says Supreme has been in business for twenty-one years, making this their 1948 catalog. In it the model 562 has been replaced by an updated model 688 Audolyzer. So 1947 was the last year for the 562. 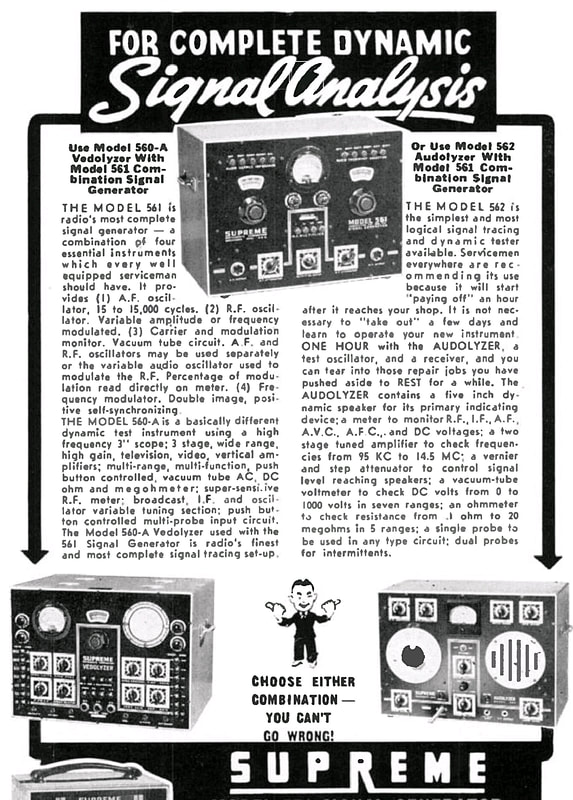 I like to look at the period radio magazine ads and the earliest ad I found for an Audolyzer is in the September 1939 Radio Craft magazine, where it shows the black front panel in a cabinet with the handle on top, and a single 1/4" phone jack.

​There's another ad in the October 1940 Radio Service Dealer magazine, also showing a 562 with a black front panel, but it has the handles on the sides, and has the two 1/4 jacks just as shown in the 1941 catalog.

One of my favorite ads is from January 1941, offering the Audolyzer, or the Vedolyzer, in combo with a model 561 signal generator as a complete dynamic signal analysis system. And they all have matching black panels.
I am restoring two Audolyzers, one with a black faceplate and one that is Gray. The gray one is finished and the black one is next on the bench. Click a link below to see the page for either one.
Model 562 Audolyzer (Gray)
Model 562 Audolyzer (Black)
Page created 9/23/2021
Last edited 11/29/2021
Powered by