The model 562 Audolyzer was advertised by Supreme as a dynamic RF and AF signal tracer and radio analyzer. It contains a 5-band tuned radio frequency (TRF) receiver with a built-in speaker. The receiver is also integrated with a built-in vacuum tube voltmeter (VTVM) and an ohmmeter. It looks like the model 562 was manufactured from 1939 to 1947 before being replaced by a newer model 688.

​I've read online that the earliest units had a gray face plate in an oak case, a #80 rectifier tube, did not have the ohmmeter, and used a bias battery in the first audio amplifier. There is a 1939 schematic available online for this early circuit.

Later units are said to have a black metal cabinet and face plate, the audio circuit was modified to eliminate the bias battery, the rectifier was updated to a 5Y3 and, of course, it had the ohmmeter. But my unit, and photos I've seen online of others, show a mix of characteristics such as a black face in an oak cabinet, or like my particular Audolyzer, a gray face in an oak case and the #80 rectifier like the original units, but with the ohmmeter and the rest of the circuitry that matches the schematic for later versions. Another schematic I found is dated 1946 and says it is for units S/N 2100 and up and shows a 5Y3 rectifier. This Audolyzer is S/N 2443 but still has a #80 rectifier. Doesn't make sense. Supreme apparently did make a lot of incremental changes over the years, but I also think some of the online info is not accurate.
The chassis removed from the wood cabinet. The cabinet is falling apart at the joints and needs reglued and refinished. I like the oak cabinet better than a metal cabinet.
The tube complement, starting with the glass tubes, from front to back, are a 6J5 for the VTVM, a 6V6 audio output amp and the #80 full-wave rectifier. On the metal tube side the first two are 6SG7 RF amplifiers and then a 6SQ7 detector and 1st audio amp. The schematic shows two 6SK7 tubes but the 6SG7 is a valid substitute.
I noticed in a picture from an Audolyzer manul of a metal-cased unit that the two jacks on the right were changed to 1/4" phone jacks. Only the probe jack was still an antenna-style jack on that unit. I thought about replacing the other two jacks with either 1/4" phone jacks or BNCs, but neither fit the existing holes all that well so I just left the originals and will make an adapter cable.
I removed the variable capacitor and cleaned it with a product called Super Clean. It came out almost as shiny and clean as new. It's a degreaser so a coat of WD-40 was applied after cleaning to protect the metal.

​The RF Multiplier switch has two paper caps to replace. The hard part was just getting the cover off. In the early schematic there are three capacitors on the switch. The 0.15uF for the 1000 position was removed and that switch position grounded in the later schematic. Not sure if that was just a cost savings move, so I think I will add the capacitor back to see what, if any, difference it makes.

(Update: I added the 0.15uF cap back and compared it to just a gnd and didn't see any difference in signal levels for the 1000 positon.)

On the subject of cost savings, I notice quite a few resistors that don't match the schematic, such as substituting a 360K resistor where the schematic calls for a 350K, or a 910K for a 1Meg. I wonder if Supreme might have had a large stock of certain values and tried to use them wherever possible.
(​Update: I found this R&A speaker online and it dates from the 1960's, so this repair/replacement is about 50 years old.)
The oak cabinet joints were reglued and then it was sanded, stained and coated with clear enamel. The original handles were missing and replaced with "screen door" handles from a hardware store.

​The metal back panel was also missing and a new one was cut from a decorative metal panel. Grommet holes were also added for the power cord and antenna coax cable and I made a reproduction power specs label. I cut the power cord hole large enough to get the plug through and I still need to buy a big grommet for it. It's not an exact match for an original back but close enough. It buttons up the rear nicely and still allows for good ventilation.
The front panel was stripped and repainted in a black wrinkle finish. I like the black face but decided to recolor the panel gray to match the chassis. The wrinkle paint is VHT brand and available at auto stores. VHT also makes gray wrinkle paint but it was not available locally.
​
I've found a couple of fonts that are pretty close to the Supreme lettering so now I can recreate the dials and print them on water slide decal paper. I also found a couple of products called Microsol and Microset to "melt" the decals onto the finish of the panel. 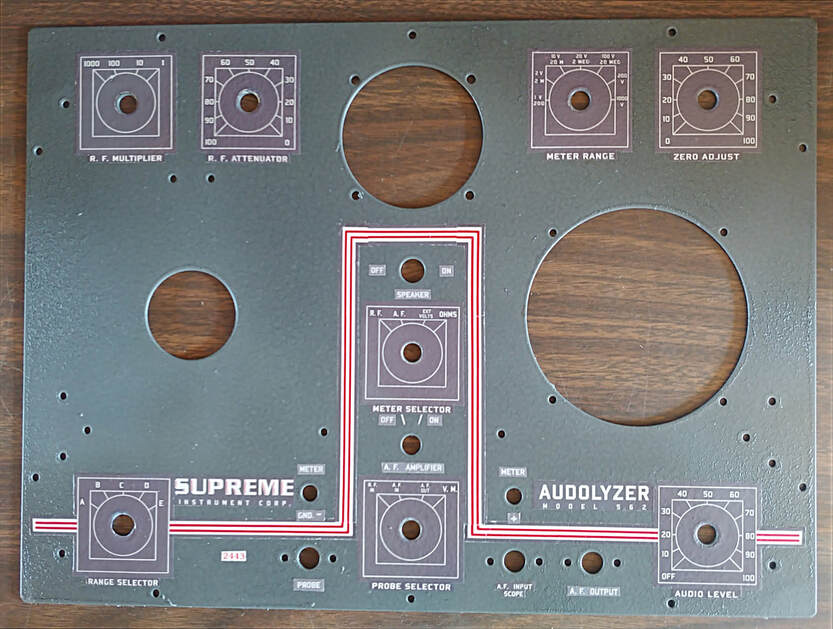 All the new decals are on. That was a lot of work. It's not perfect but I'm still very pleased with how it came out. After the labels dried the panel was coated with multiple coats of clear matte enamel spray to protect them.

Matching colors of the decals was a pretty impossible task. They are one shade of gray on screen, and another shade when printed and applied. Plus I printed several sheets and each sheet is a little different. The matte spray also seemed to tone down the labels some. In the end they are close enough for me. Also my camera exaggerates the difference between panel and labels. 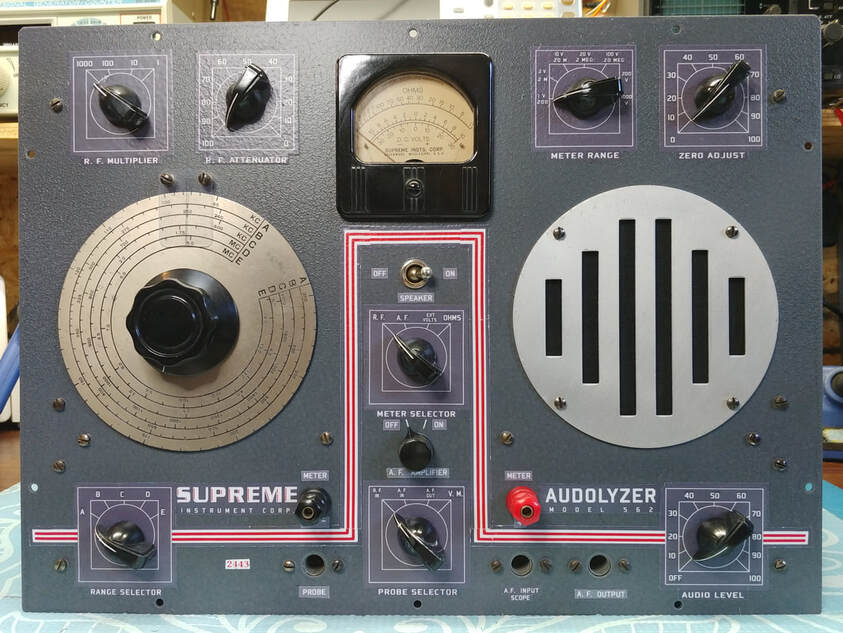 Some assembly required, but it's looking like an Audolyzer again. This thing was taken down to the point where putting it back together was almost like building a kit. During reassembly all rusty hardware was replaced with new. The black fillester head screws on the front panel were cleaned and reused as were any of the slotted pan head screws that cleaned up well. Most all of the nuts and washers for the panel controls and switches was also replaced with new. Can't wait to get it powered up. 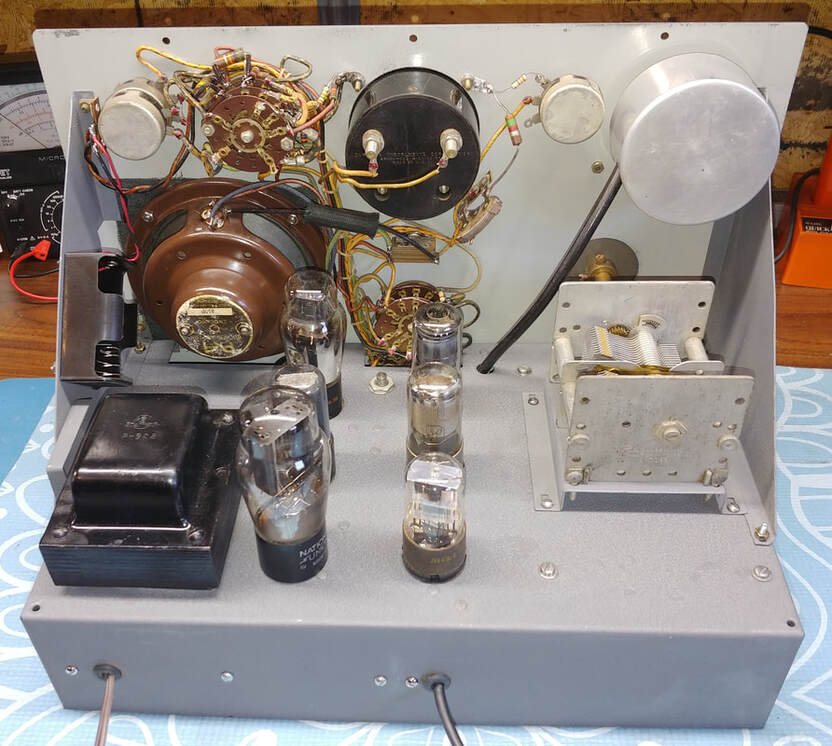 The chassis is all back together and instead of reusing the metal tubes I installed a full set of glass tubes, just for looks. Also, on the left side plate I added a "D" cell battery holder for the ohmmeter. Hardly looks like the same unit now.

The three lowest ohmmeter ranges only use the 1.5-volt battery and can be used even when the Audolyzer is turned off. So I was able to test them already and all three work great. Readings are well within the 5% tolerance of the divider resistors. 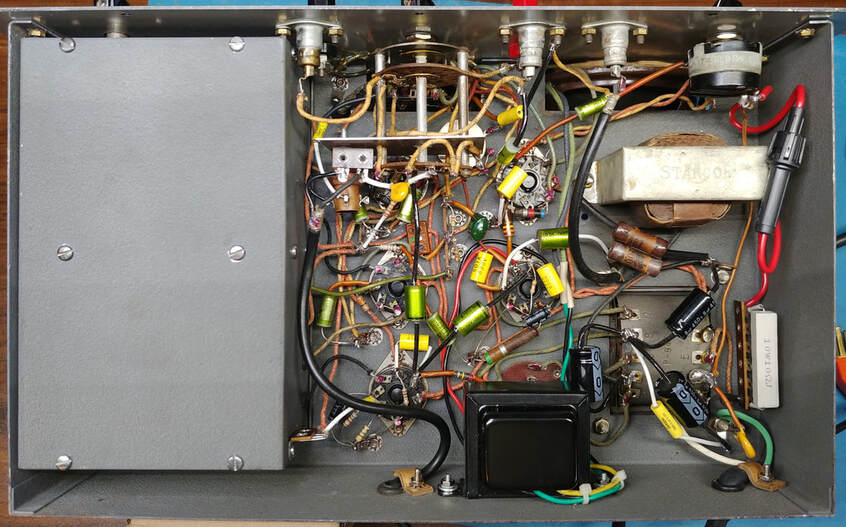 A look under the completed chassis. All the old waxed paper caps and old electrolytics are now gone. The next steps are powering up the set and checking the power supply voltages, checking the voltmeter and higher ohms ranges, and then aligning the TRF receiver.
The reason my B+ is reading high is because my line voltage here is 122VAC. For safety I added a fuse to the AC line and used a pigtail fuse holder so I wouldn"t have to drill a hole in the chassis. And while I was at it I inserted a 10-ohm resistor to lower the line voltage to the transformer primary back down to 117VAC, just like in the good 'ol days. This is much healthier for the transformer and the set as a whole.
Originally the instrument had a 2-wire power cord, but I found it needs a good ground to keep hum out of the RF stages, so I changed to a 3-wire power cord. I figured this was simpler than keeping the coax shield always connected to an external ground.
Other alignment issues included:
- on the bands with both parallel and series trimmers (Bands A, B and C), the two trimmers interact. If a trimmer won't peak (all open or tightened down) then back off both trimmers a turn or two and try again starting with the parallel trimmer.

- Band E was completely dead, couldn't hear a peep from the signal generator. It turned out to be an open secondary coil to the 2nd RF amp. The winding was damaged and the wire broken in one spot on the coil, but with the help of a microscope it was repaired. I also needed to add a small NPO capacitor across the trimmer for this band to get it to peak.
​
- I started the alignment on Band E. The tuning capacitor's range is wider than the dial scales and turns past both ends of the scales, which raises the question of where it should be initially aligned with respect to the dial. To start I set it by splitting the difference so it traveled the same distance past each scale end. Then I aligned the top end of band E. Next I checked the alignment at the bottom end and loosened the dial set screws and moved it to correct the error on the low end. I kept repeating these steps until I was able to get band E to track over the entire scale. I wanted band E to track correctly because it covers WWV at 5 and 10MHz and CHU Canada at 7.85MHz.

- on band D fully tightening the trimmer did not allow me to peak the signal. I added a 12pF NPO capacitor across the trimmer and then was able to peak it. Probably the inductance of the coil has changed over the last 75+ years.

A lot of notes and changes to the schematic. Some of the changes, such as the speaker and field coil, are specific to this instrument only. 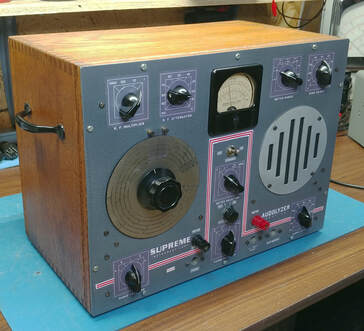 After the repairs and modifications the TRF receiver does quite well. The selectivity is a bit wide, to be expected from a TRF, but the sensitivity is good. I'm using about 30 feet of wire from a loft window as an antenna and can develop 30 volts or better of AVC voltage on a strong shortwave station. And the audio fidelity puts your average AA5 to shame. The audio is clean and hum free and some of the international broadcast stations have very good fidelity (I think they cheat on bandwidth), much better listening than on the noisy AM broadcast band.

​Now that the receiver is aligned and has some sensitivity, it's time to see how the Audolyzer works as a test instrument. I'm restoring a 1936 Sears Tombstone radio and it gives me the perfect opportunity to test the Audolyzer's capabilities. As I began testing the Sears radio I almost immediately discovered a possible answer to my questions about what Supreme did with the circuits. The receiver is so sensitive after my mods that just tuning in the radio's IF on the TRF, and then waving the probe in the vicinity of the IF amplifier, sounds like you just tuned in the station in on the TRF dial. If you actually touched the probe to the IF amplifier circuit you might blow the speaker out if the volume is not turned way down. When testing from the antenna input their recommended procedure is to feed a signal generator (Supreme model 561) to the input. The signal level of the generator can be adjusted as needed, so the lower gain of the original circuit would pose no problem. Maybe Supreme was intentionally throttling the gain of the receiver. Can't be sure if that's what they were up to, but I prefer the receiver as it is.  Looks like it is ready to take its place on my new radio bench.
Page created 12/7/2019
Last updated 6/17/2020
Powered by