After retiring in late 2014 we began searching for land and the next year finally settled on 10 acres in the Potomac Highlands of West Virginia as the place to build our new home and observatory. After nearly 30 years going where the work was, with a good part of it overseas, we're looking forward to slowing down and enjoying the country life again. The plan is to build a small log home, a garage and workshop, and to finally put the Lancaster dome up, but first we have to get all the basics in place. This is all "pay as you go" so things will only progress as time and money permit.

In the fall we purchased our 10 acre lot in a small development with easy access to Appalachian Corridor H highway being built through the area. It has the best open views of the night sky I've ever had and promises to be a great location for the observatory. Before winter set in we bush hogged the open field to clear away all the small cedars, pines, wild roses and such, and then started making plans for spring. 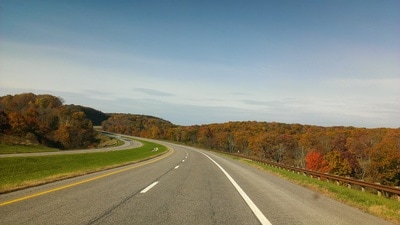 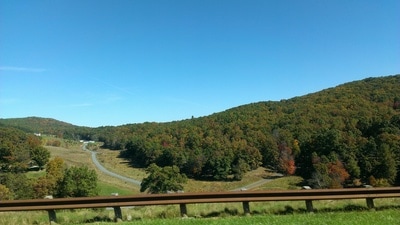 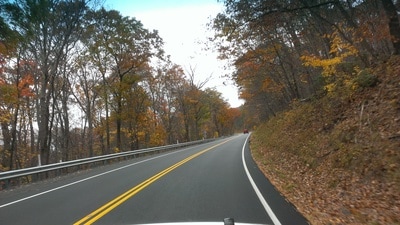 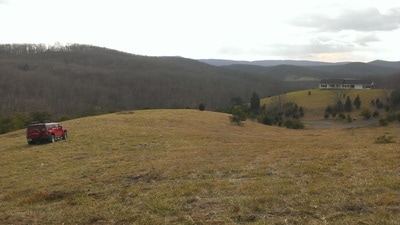 In the spring I went back to work full time to earn some extra money and speed things up a bit. Then we began making improvements, constructing over 300 feet of driveway, leveling a spot for a garage/workshop, installing a septic system and drilling a well. During the course of the year we cut a lot more brush, planted 28 trees and did our share of mowing the several acres of open pasture. Most of the trees are a variety of ornamentals including Japanese Maples, Dogwoods, Redbuds, Tri-color Beeches, Smoke and Fringe trees, and several larger varieties such as Scarlet Maples and Weeping Willows. Next we began trimming pine trees and cleaning up the mess left behind by the bush hogging, stacking up a large pile of brush in the process, which we burned during winter. This took us all the way into fall and our plans to erect a garage this year were postponed until Spring 2017 while we saved more money to pay for it. 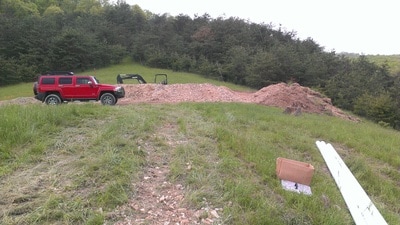 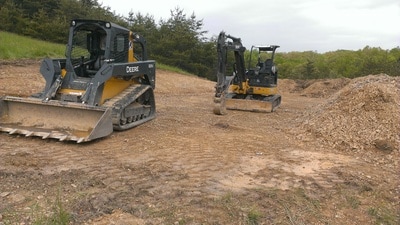 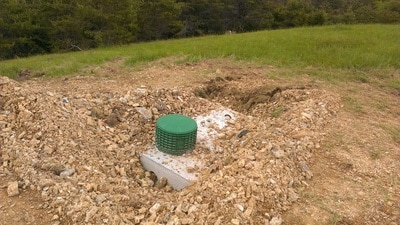 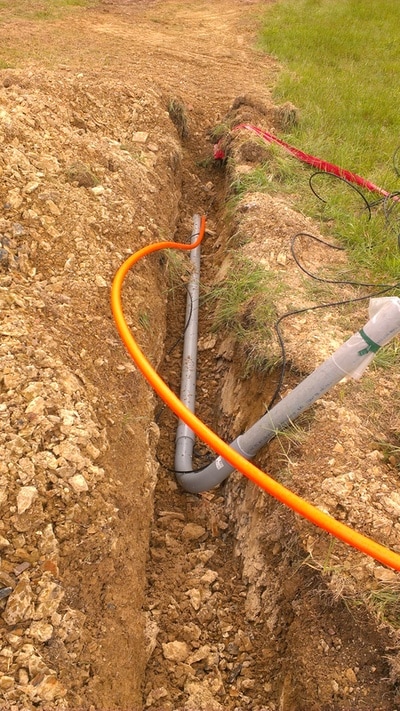 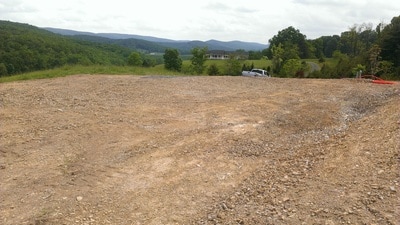 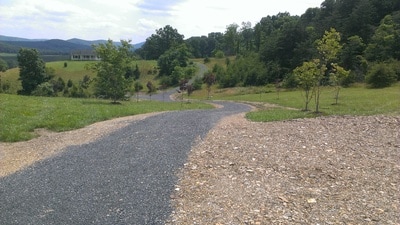 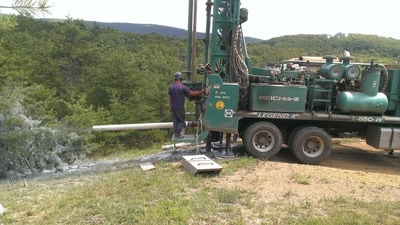 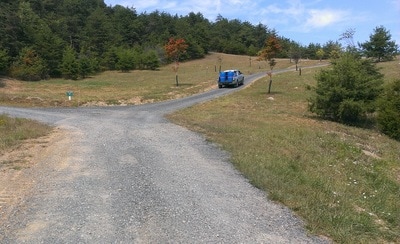 We started planting more trees in March and the garage construction started in April. While waiting we set out 17 semi-dwarf fruit trees to create a small home orchard. It includes several varieties of apples, pears, peaches, cherries, persimmons and in a shadier spot, a few paw paws. We'll also be creating a blueberry patch and eventually add some grape vines. So far more than 50 trees and shrubs have been planted.

Once the garage is up the rest of the summer will be spent on improvements to it, completing the electric hookup, installing a well pump, and putting our house in Virginia on the market.

We'll start work on the observatory building and dome when time and money permit, but it might have to wait until the home is up. At the very least I can get busy deciphering the dome assembly in the garage this summer.
At the end of the fourth week the building is done except for gutters and garage door. They'll both be installed the following week. The loft will provide a lot of storage and workshop space.
Finally finished, at least the contractor's part is. I've still got work to do on the inside, plus getting the electric service hooked up (end of June) and installing the well pump and pressure tank (by end of July). All the basics will soon be in place so it's finally time to put the for sale sign on our home in Virginia and start making final plans for building the log home.
At the beginning of July the electricians installed the meter base, breaker box and an automatic transfer switch (ATS). They also ran the conduits and set the transformer base, and inside the garage they installed a 100-amp breaker panel. The outside breaker box provides a 200-amp feed to the house and a 100-amp feed to the inside garage panel. The power company showed up the next Friday to set the transformer and pull the underground cables, so now we have power.

The conduit for the power feed to the house, the fiber optic conduit and the phone line were brought around the corner and across the driveway (sticking up beside the Hummer) and will connect to the house once it's built. At the same time the sewer line to the garage was run down the hill to the septic tank.
The next Monday the well company was there to install the pump and pressure tank. The excavator had already trenched through the shale to the well head. One of the black pipes coming out of the garage goes around the corner to a hydrant and the other is the incoming water line. The water line to the house will connect at the hydrant.
Setting the pump. It's going down to 380 feet. The 1-inch water line from the well to the garage is encased in 4-inch corrugated plastic pipe to protect it from the shale rock when it's reburied.
Before the day was out ER Excavating returned to bury the lines. Shouldn't be any need to dig around the building anymore so now we can clean up and put down gravel.

An October sunrise. Just getting to work on the garage as the sun was coming up over the hills...
We now have a contract on our home in Virginia so work on the new house should be in full swing by spring. But in the meantime work inside the garage is continuing with walls being studded up and insulated.

The walls are 10' tall so the tops of the walls still need to be stuffed with insulation and covered with sections of plywood. Then it will all get trimmed out and painted. A bit over half the walls are insulated so far.
Insulating the roof is getting close to finished, but still some work to do over the bathroom and stairwell.

Eventually sheets of OSB will cover the insulation upstairs but it's not a priority at the moment as the weather is getting colder and all the insulating needs to get done. Southern States will be coming soon to install the propane tank and heaters.
To ring out the old year we finalized the sale of our home in Virginia in mid-December. We were completely overwhelmed with the time and effort involved in moving everything ourselves. We filled two PODS, our garage, a storage building and even have stuff in a friend's barn. Fortunately, a couple of our friends pitched in to help us the last week of the move or we would never have finished on time. Never going to do that ever again. Seriously, never, ever again.

It's a new year and this page is getting pretty long so I've created a second page to pick up with what's happening in 2018. 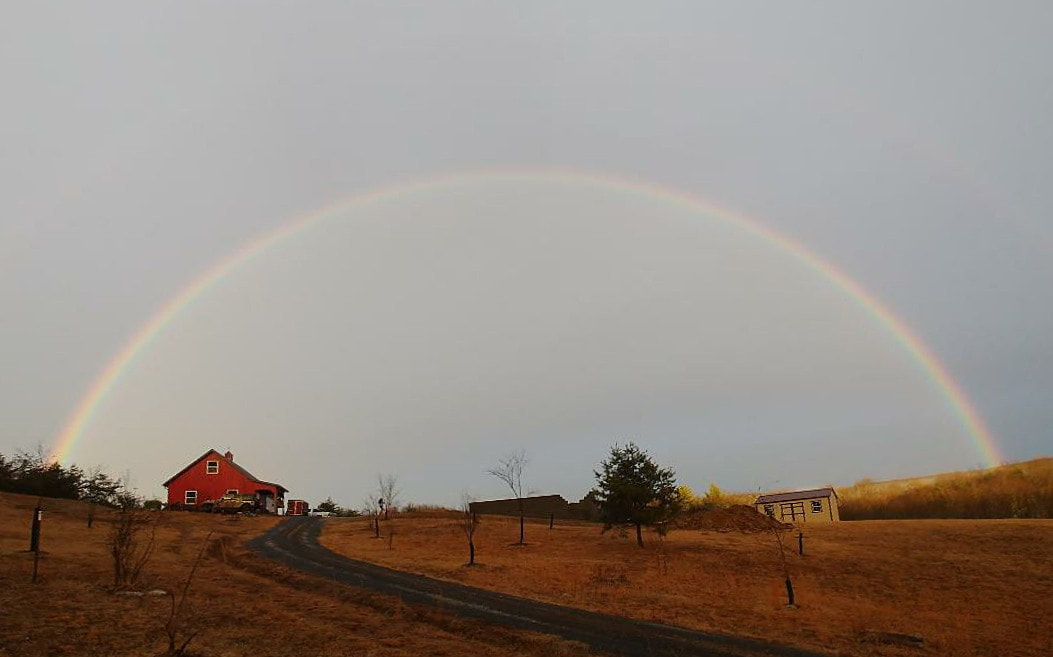