This is an early Questar telescope which according to Questar was "born" August 27, 1956. It is a Maksutov-Cassegrain design and is complete with the exception of the 80X (12mm Erfle) eyepiece and the original manual. There was a booklet in the case from 1964 but unfortunately it had gotten wet at some point in the past and several of its glossy pages are firmly glued together. Overall the scope is in very good shape considering its age, but I still plan to return it to Questar for complete servicing.

Questar was founded in 1950, although the design for the 3.5" scope began as early as 1946, and a patent was applied for in 1948. I read online that production of the first commercial scopes didn't begin until May 1954, due to material shortages during the Korean war. My Questar was made about 15-months later. According to Questar, serial numbers began at 50, and this one is S/N 199, making it the 150th scope produced. In 1956 it cost $995.00, equivalent to $9568.00 today. More on the history of Questar can be found online, especially at the Company Seven website.
This is my first Questar and I hadn't seriously considered buying one before now because of the cost and small aperture (mostly the cost). But I got it in a trade and now that I have it, it's kind of like a new puppy, I can't help falling in love with it. The quality and workmanship are excellent. The small aperture is not a put-off anymore because I've been needing an easy to set up, portable scope to better share the moon, planets and brighter night sky objects with my wife, exactly what this little scope is designed to do. And it's as much a work of art as it is a telescope - the moon map tube and star chart dew shield are beautiful, and a lesson in astronomy all by themselves.

It comes packed in an English-made saddle leather case that's still in decent shape after all these years. 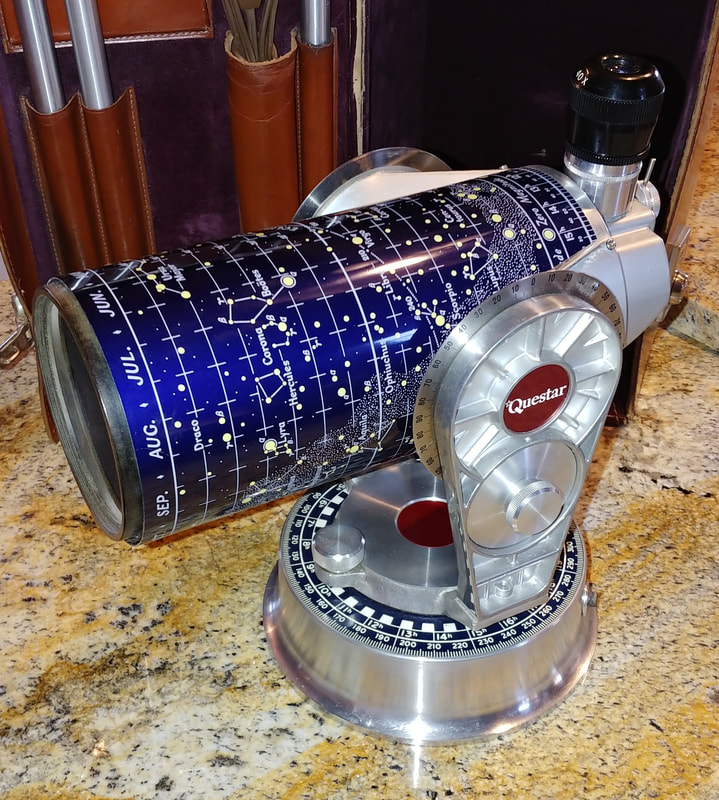 A side view of the scope with its star chart dew shield. This is the early etched and filled version of the star chart. 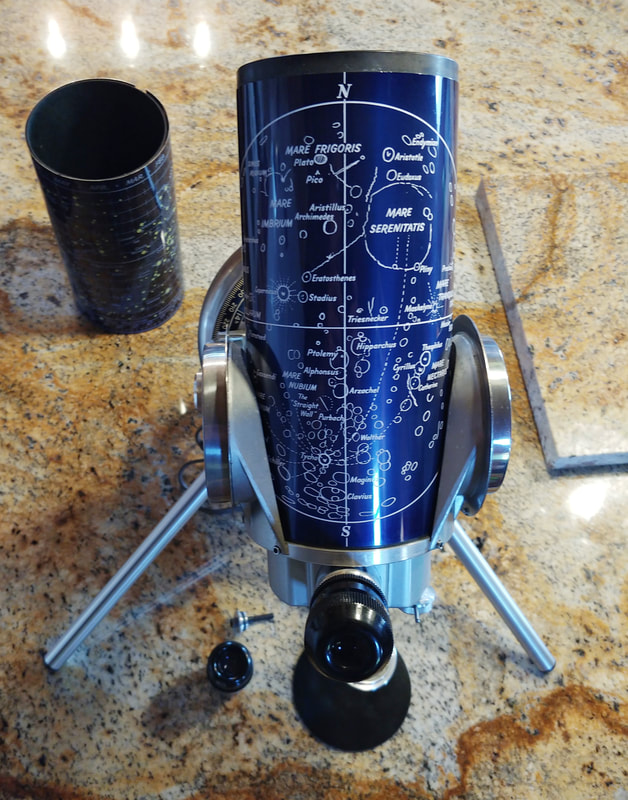 The star chart dew shield has been removed to reveal the moon map on the main tube. 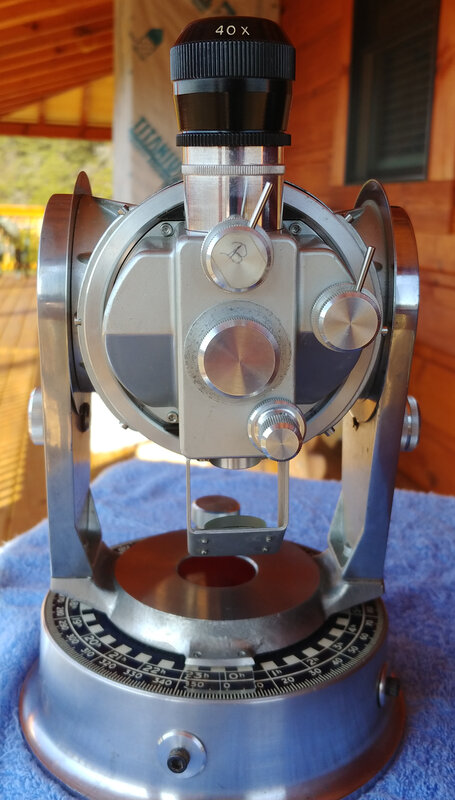 And a rear view of the scope and control box. This control box is painted - not bare aluminum - another change made in 1956. 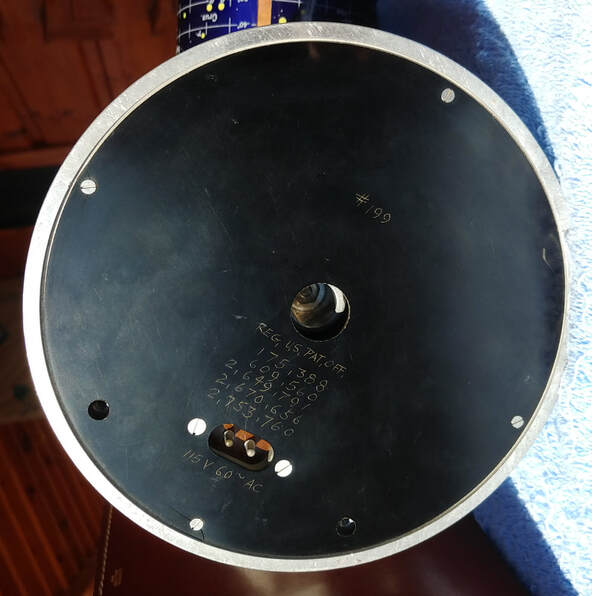 The Synthane bottom of the drive with the hand engraved serial number and other info. 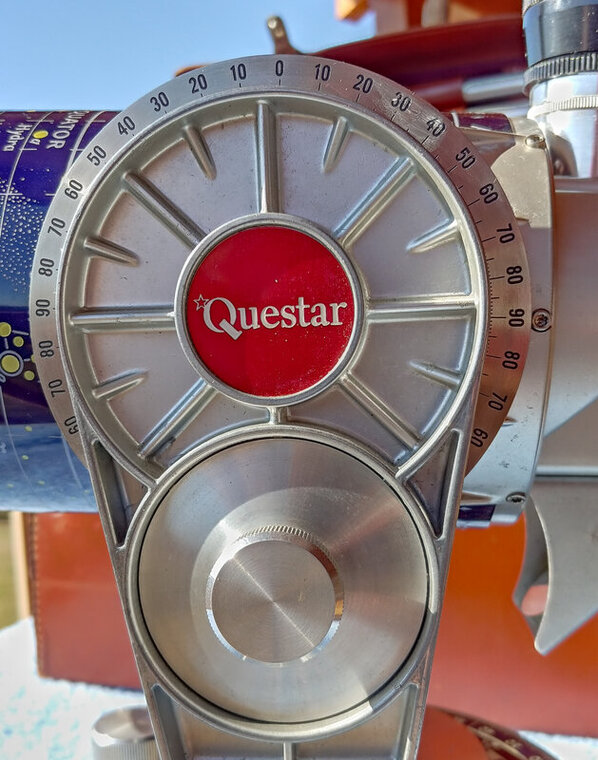 This scope has the red badge with the star. Questar changed from the "Pepsi" badge to this one in early 1956, a few months before this scope was made. It also has the solid knobs for the DEC controls. 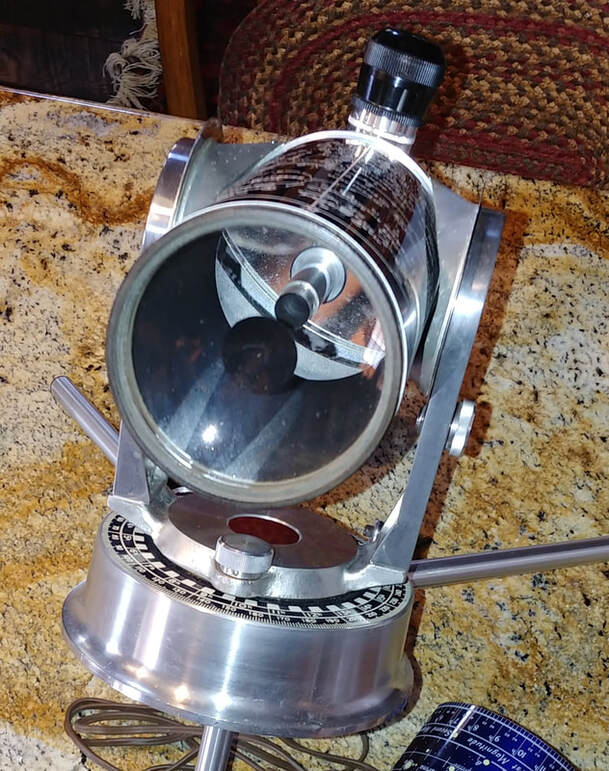 A look at the corrector lens and primary mirror. Everything optical in the scope needs cleaned. I guess that's to be expected for a scope that is 65 years old and, according to Questar, has never been back to the factory for service.
With the eyepiece removed the Barlow can be flipped into the light path and inspected.

The prism is visible after flipping the barlow out of the light path. This should be an early amici prism.
With the prism in "finder view" you can look straight through the control box at the finder mirror. I just couldn't get the phone camera to focus on the mirror.
Looking through the access port at the scope secondary mirror and primary reflection. This scope appears to have the Synthane back plate.
Thanks to a Questar collector on AstroMart I now have an 80X eyepiece. This one is marked 80-160X, which makes it just a little newer than the scope. According to the Company Seven online archive Questar changed the label in 1957 and used it until 1973.

​In the second photo are the pointers that appear in the field of these eyepieces. I read they are for helping center an object in the finder. I'm still looking for the correct vintage one just marked 80X.
I found a 50th anniversary pewter model of a Questar at an estate sales store several years ago. It is a 1/3 scale model and I thought it was about as close as I would ever get to owning one. Guess I was wrong.
I built this drive corrector in 1990 for use with my original orange tube C-8 and later my Ultima-8. Since then it's been in a box on a shelf and I almost disposed of it. Now it's the controller for the Questar's RA clock drive.
Because of the scope's age and value, I finally decided to send it back to Questar to have their Standard Service done. Their report back is that the scope and optics are in good shape and no surprises were found. It will take them a few weeks to finish the cleaning and adjustments, but it should be back by the end of March.
Page created 3/13/2020
Lasted edited 3/1/2021
Powered by