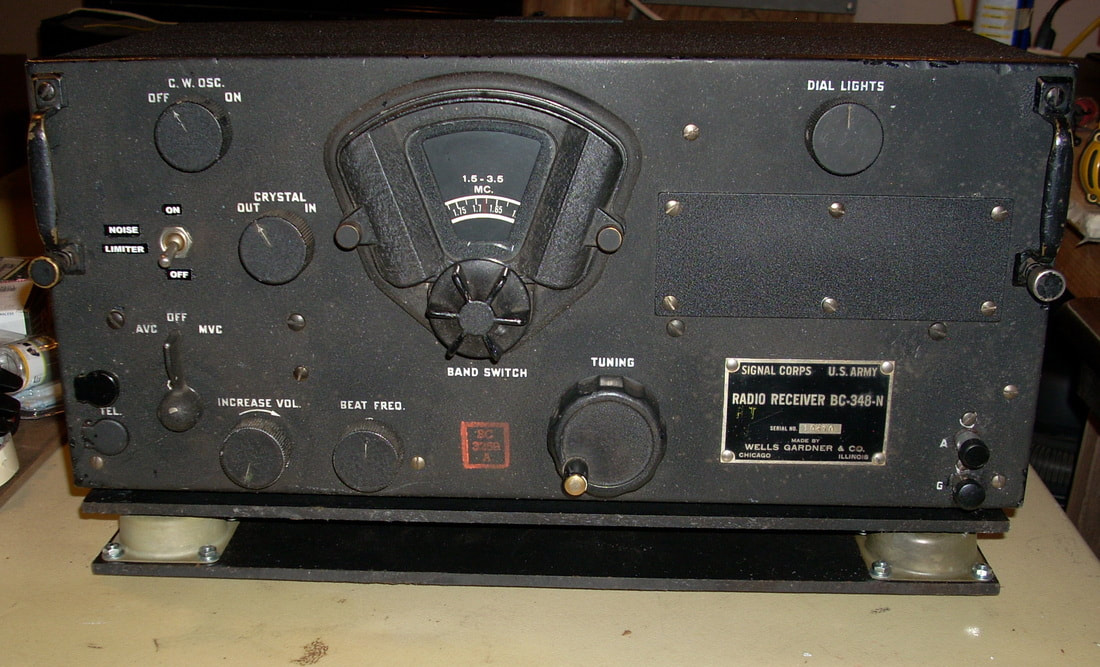 I picked up this WWII and Korean War era radio at a flea market. It's a shortwave receiver tuning 200 to 500Kc and 1.5 to 18Mc, doesn't have a built-in speaker, and runs on 28VDC, the battery charger voltage on American bombers. According to what I've read online, this was the liaison receiver in American heavy bombers such as the B-17, B-24 and B-29 (the B-29 Enola Gay had one of these on board). It was also used on large transport aircraft and by our Allies. Over 100,000 sets were produced with various updates and changes designated by letter codes and were in service until the early 1970's. This BC-348 is an "N" model. 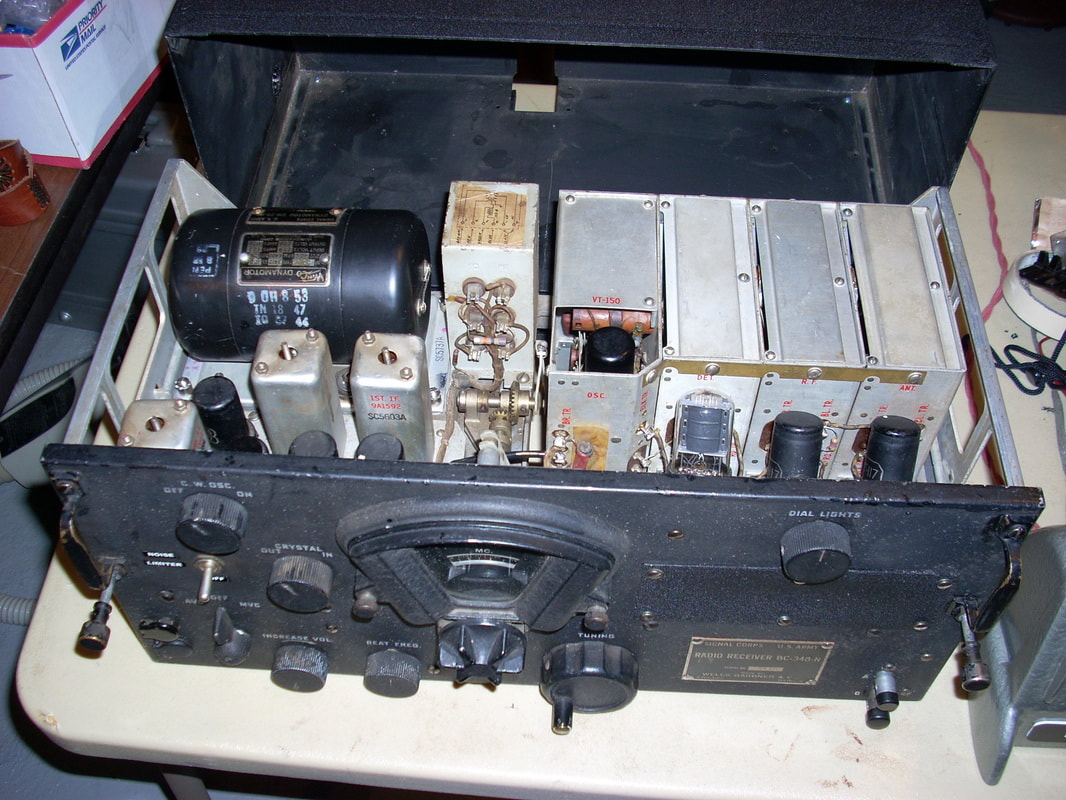 They also drilled extra holes in the cabinet rear and front panel. These mods were from the old Surplus Radio Conversion handbooks. Personally, I think the handbooks should have been sub-titled "How to hack up a really nice radio".

I restored the receiver to as close to original condition as I could, even installing a replacement dynamotor that I stumbled upon at a hamfest. The only non-original modification retained is a noise limiter circuit since there was already a hole for the switch in the front panel. I also built a separate 28-volt power supply to power the dynamotor and the receiver's tube filaments.

Dynamotors are hard to find, but the original shock mount is really hard to come by, so I made a simple replacement mount for the radio to sit on, as it just looked incomplete without something under it and it needed to be up off the table for the rear power connector to fit. 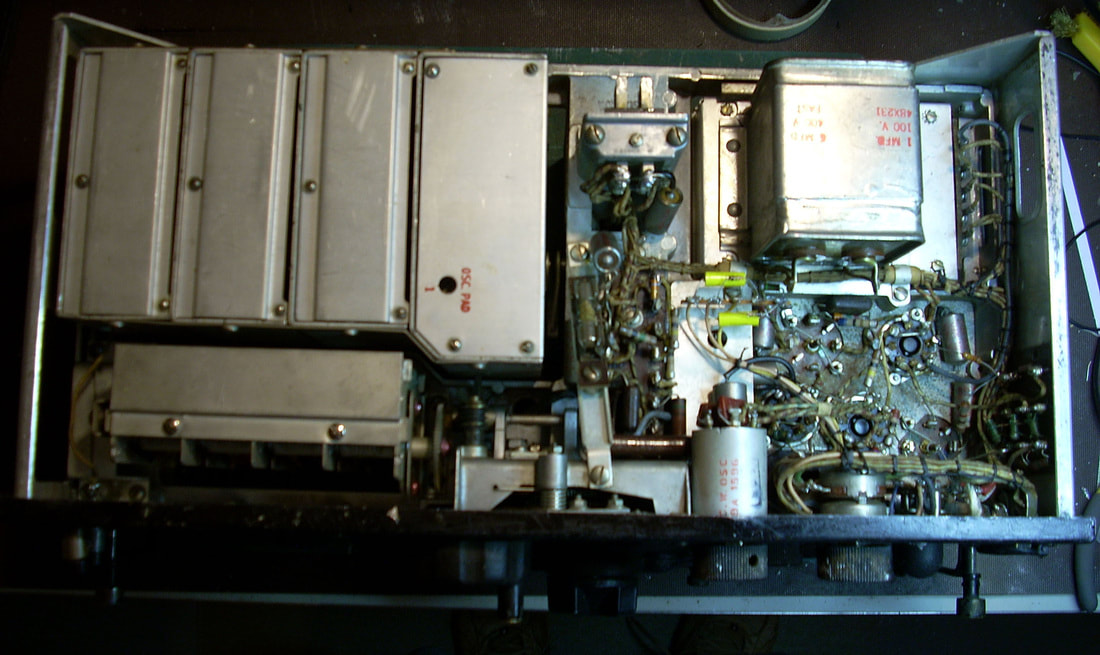 The underside of the chassis. Undoing the mods meant finding replacement parts for the dual Audio and RF gain control, the AVC-OFF-MVC rotary switch and knob, and the dial lamp control rheostat and knob. Fair Radio Sales of Lima, OH came to the rescue with some original replacements from a parts set. They also had an original style of power connector (PL P-103) for the set.

​Other repairs included:
I did not find any leaky capacitors (and I checked quite a few of them), so after nearly 70 years the radio is still running on the original caps. I wish all my radios had capacitors this good. 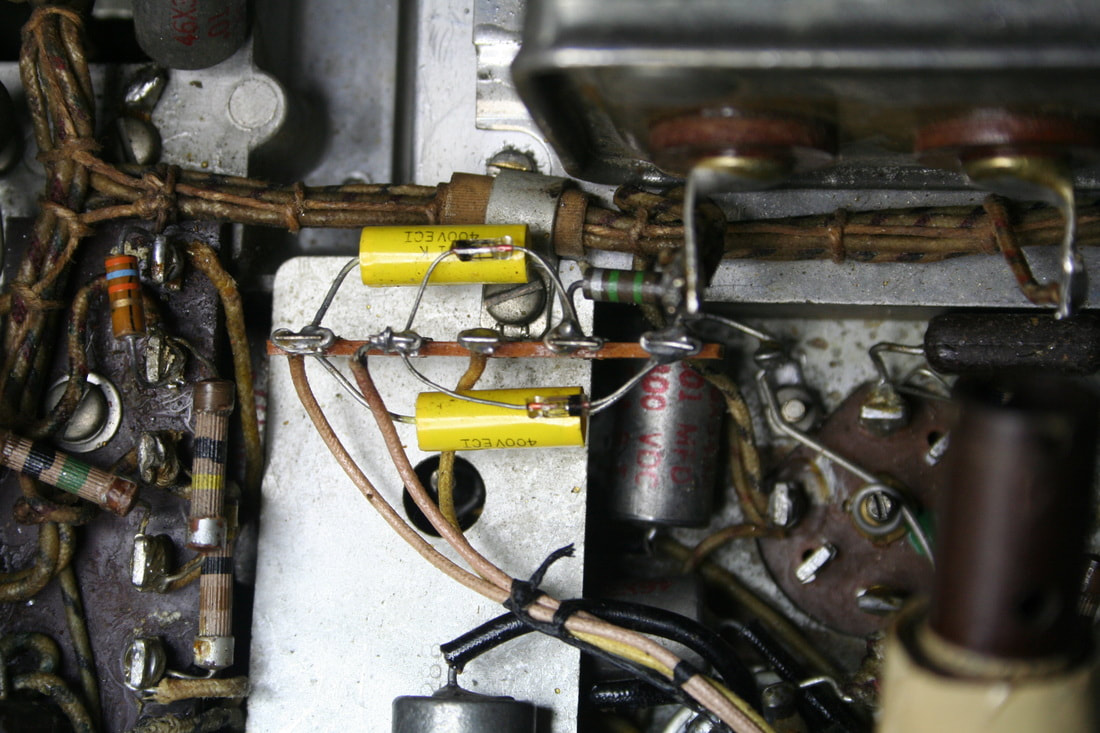 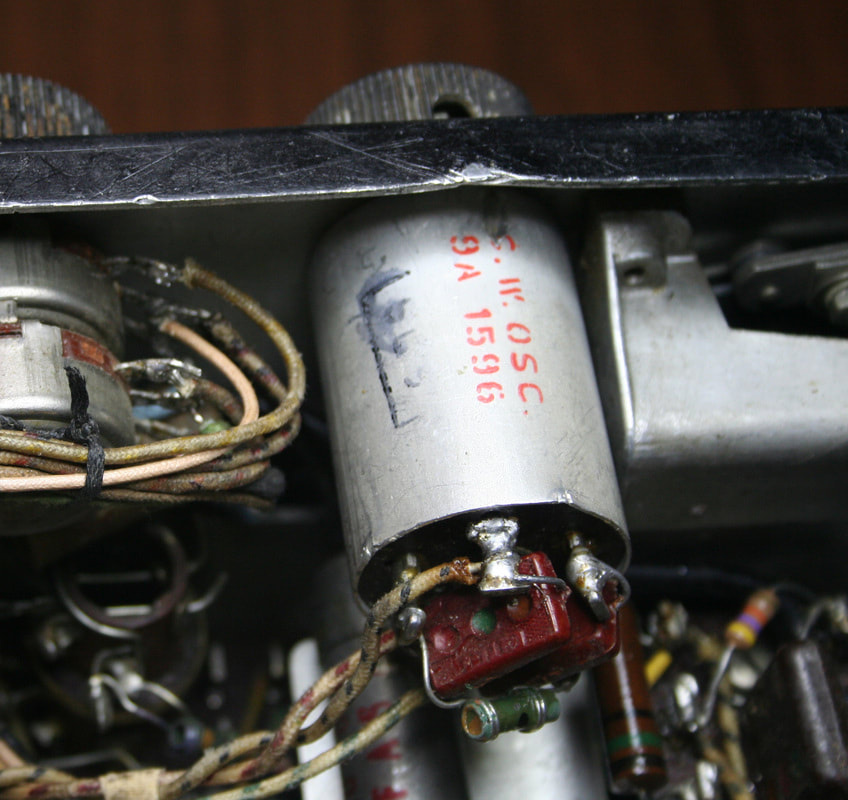 The C.W. Oscillator (BFO). Turning the front panel knob had no effect on the BFO frequency. I found the tuning shaft was sheared off inside the can by a previous owner.

But after the repairs below, and adjusting the frequency per the manual, it works like new. 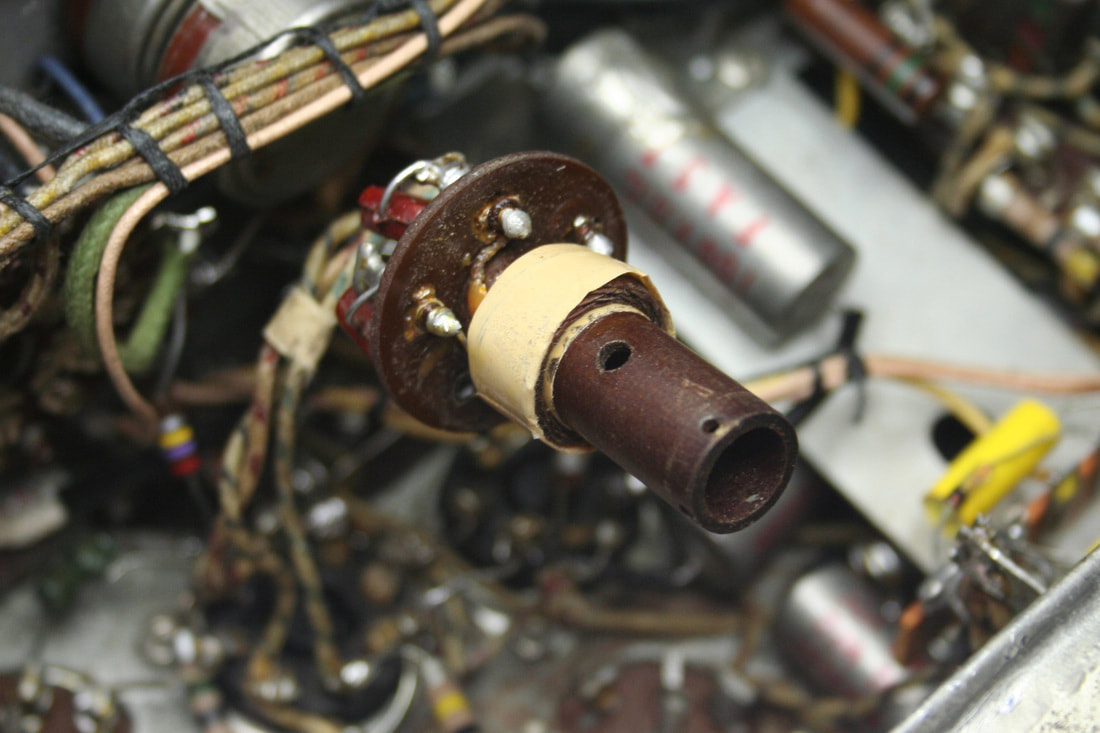 The BFO coil after removing the outer can and shaft assembly. 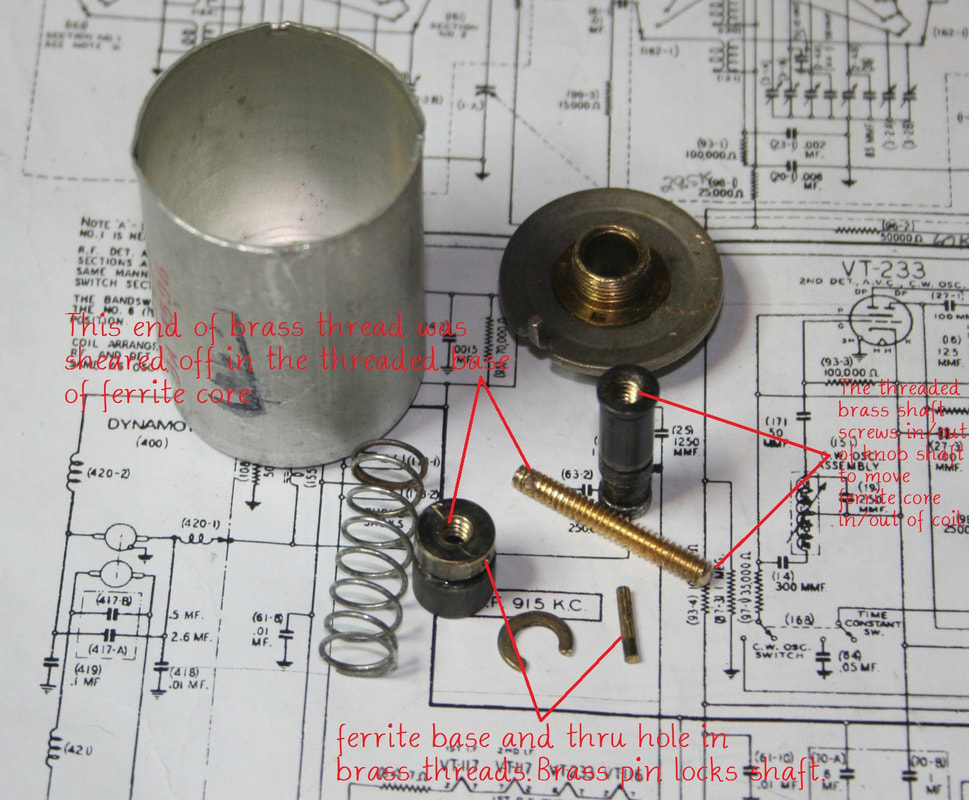 The threaded screw shaft was sheared where it was screwed and pinned into the ferrite core base (the weakest point due to the hole through the screw for the pin).

The knob shaft and threaded brass screw were rusted tight and would not budge, even after a good dose of WD-40. Apparently someone forcibly turning the knob is what sheared off the brass screw.

​I drilled out the brass screw from both the knob shaft and ferrite base and re-threaded both for 6-32 threads. Drilling the broken screw end out of the brass base caused the ferrite to detach from the base. I did not drill into the ferrite core itself as I was afraid it might break. After re-threading the brass base I just epoxied the ferrite core back on. I drilled a 1/16" hole through the new brass screw shaft at the base end to accept the brass pin. The final shaft screw length (~.875") needs to allow the pin to travel forward and back the full length of the slot without the threaded shaft unscrewing from the knob shaft. 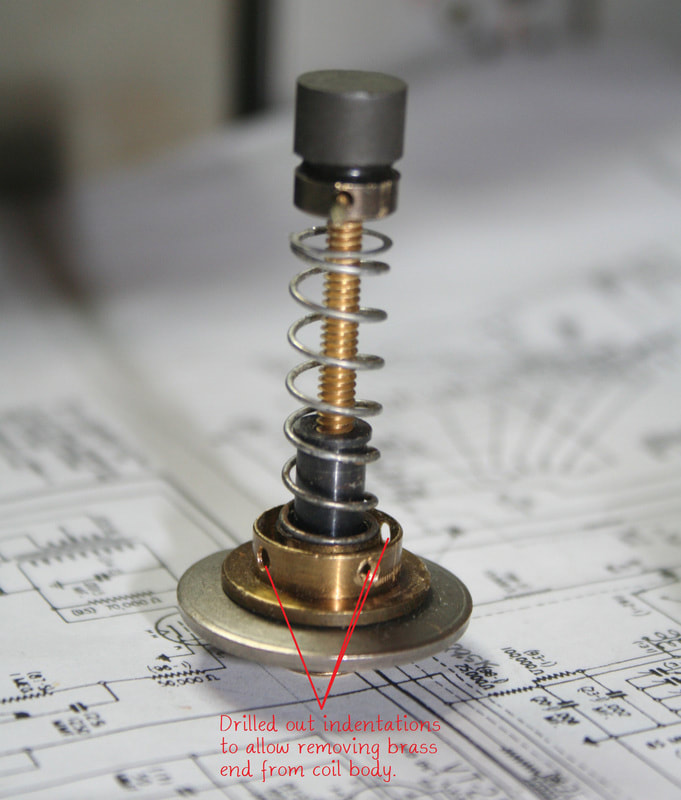 The reassembled components. After reinstalling the rebuilt assembly into the coil form, the brass pin is reinserted through the coil form slot and into the hole in the core base.

I only pressed the brass end back on the coil form. The snug fit of the brass cap and bending the tabs back over on the coil can seem to hold everything together just fine. 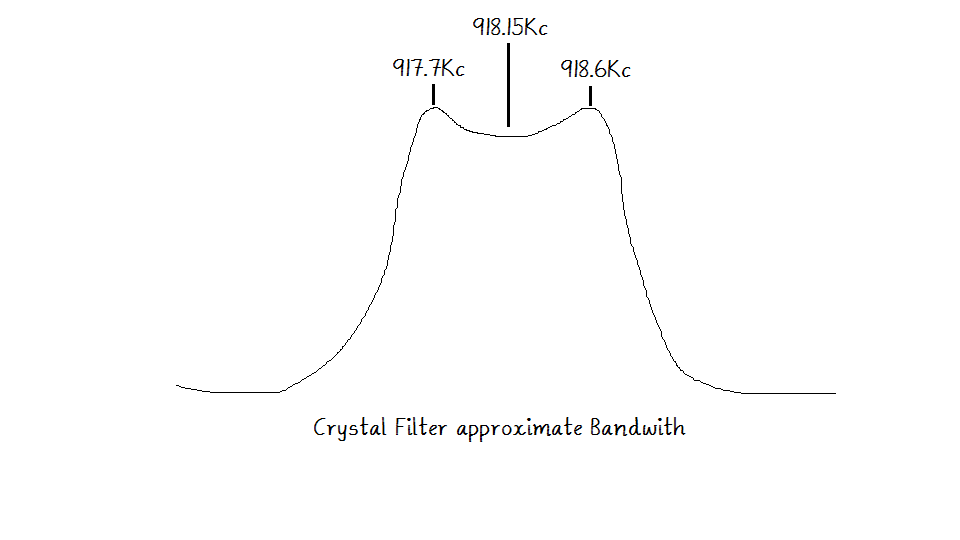 The crystal filter wasn't working so with my frequency meter and o'scope I did a rough check of the frequency response of the crystal filter in-circuit which is illustrated in the drawing. This gave me an approximation of the center frequency which had drifted a bit from the design frequency of 915Kc. Then I checked the IF alignment and discovered the IF transformers were peaked on ~908Kc, so I realigned the IF to ~918Kc and the filter came to life - just needed to get everyone operating on the same center frequency. 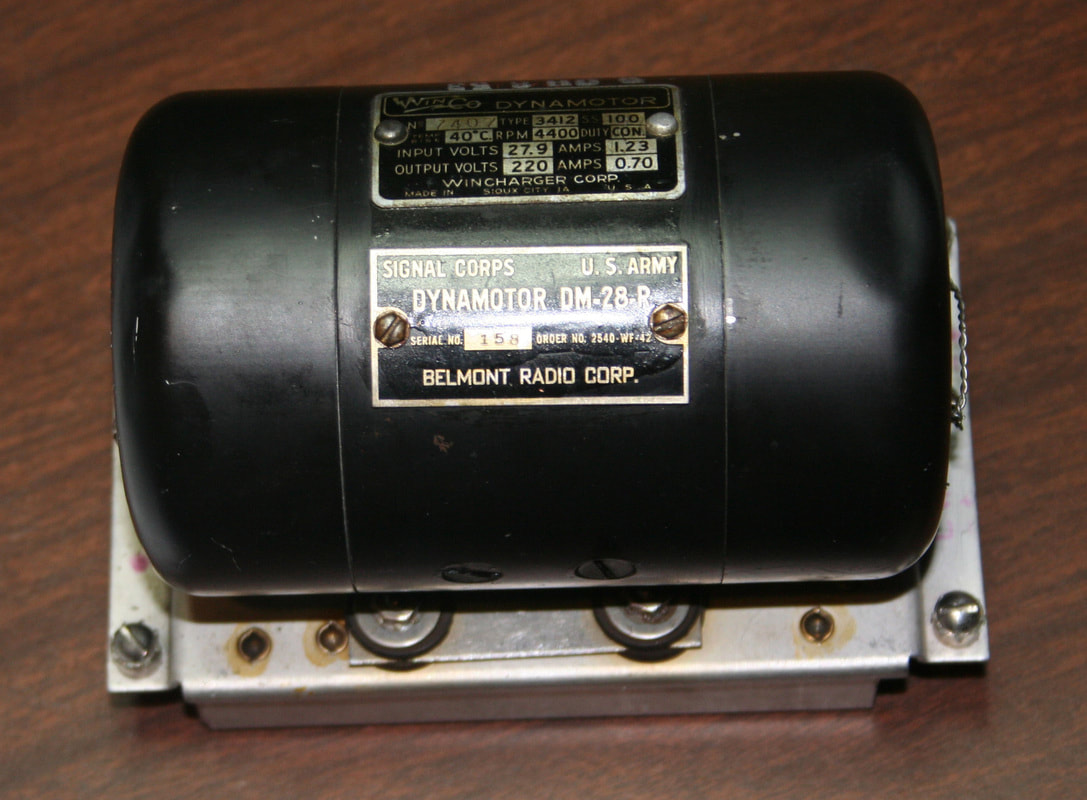 The DM-28 Dynamotor. It is a motor-generator that produces the high voltage for the tubes. Routine maintenance for the dynamotor includes re-greasing the bearings every 1000 hours or about 6 months of normal operation. 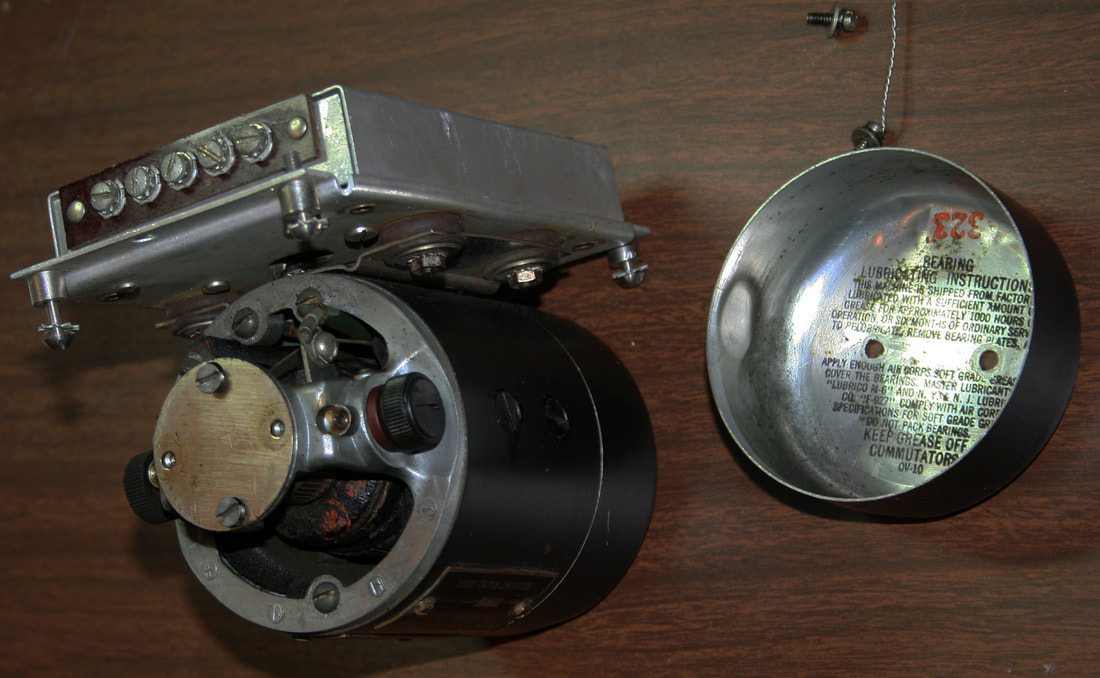 The end cover slips off after removing the two end screws. Inside the cover are the re-greasing instructions. 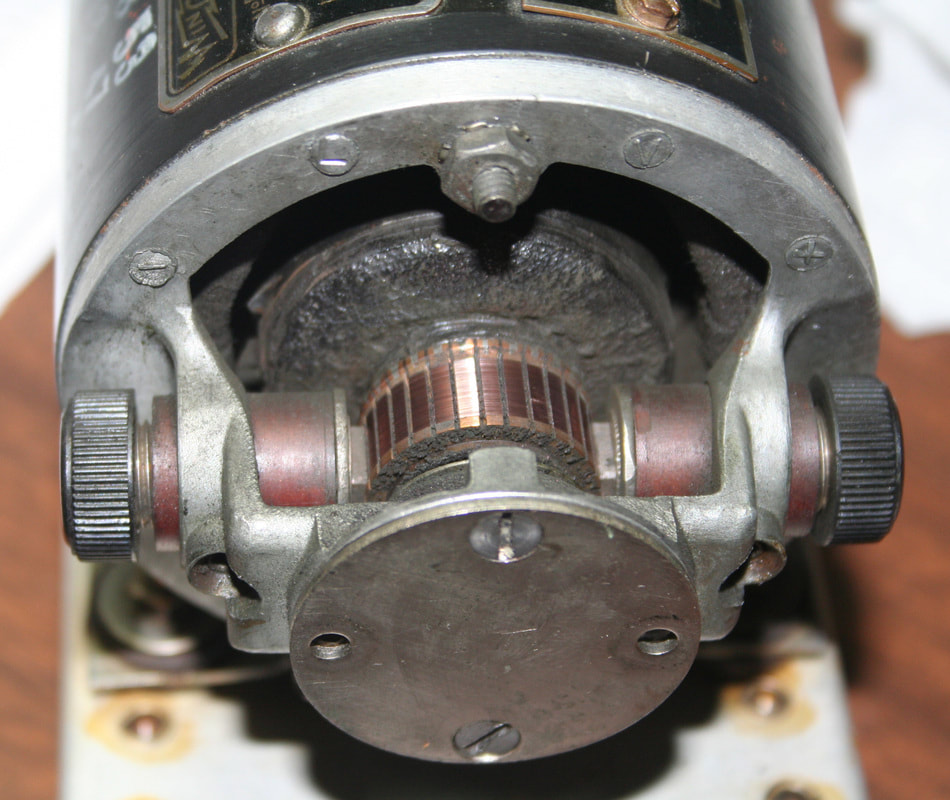 One of the two sets of commutators and brushes. The bearing is under the end plate. Both ends of the dynamotor look the same. 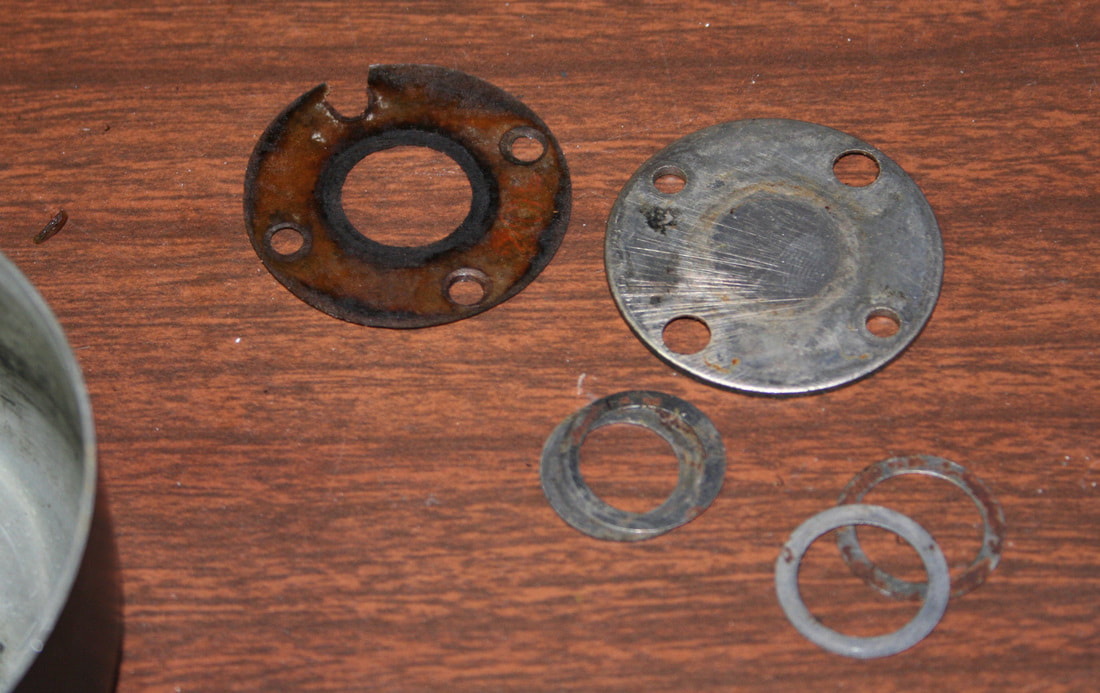